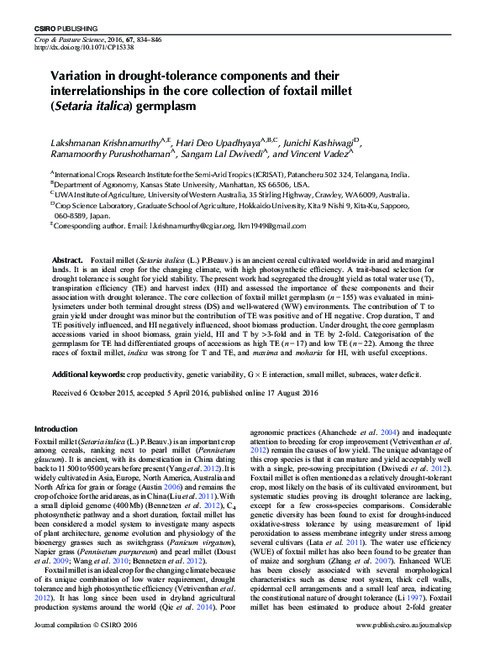 Foxtail millet (Setaria italica (L.) P.Beauv.) is an ancient cereal cultivated worldwide in arid and marginal lands. It is an ideal crop for the changing climate, with high photosynthetic efficiency. A trait-based selection for drought tolerance is sought for yield stability. The present work had segregated the drought yield as total water use (T), transpiration efficiency (TE) and harvest index (HI) and assessed the importance of these components and their association with drought tolerance. The core collection of foxtail millet germplasm (n = 155) was evaluated in minilysimeters under both terminal drought stress (DS) and well-watered (WW) environments. The contribution of T to grain yield under drought was minor but the contribution of TE was positive and of HI negative. Crop duration, T and TE positively influenced, and HI negatively influenced, shoot biomass production. Under drought, the core germplasm accessions varied in shoot biomass, grain yield, HI and T by >3-fold and in TE by 2-fold. Categorisation of the germplasm for TE had differentiated groups of accessions as high TE (n =17) and low TE (n = 22). Among the three races of foxtail millet, indica was strong for T and TE, and maxima and moharia for HI, with useful exceptions.