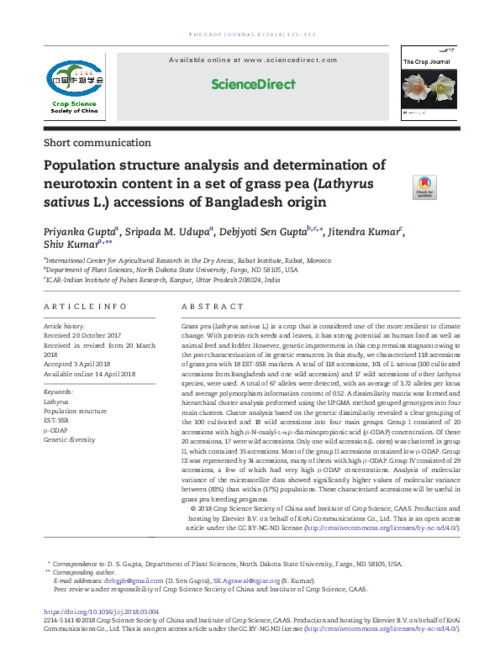 Grass pea (Lathyrus sativus L.) is a crop that is considered one of the more resilient to climate change. With protein-rich seeds and leaves, it has strong potential as human food as well as animal feed and fodder. However, genetic improvement in this crop remains stagnant owing to the poor characterization of its genetic resources. In this study, we characterized 118 accessions of grass pea with 18 EST-SSR markers. A total of 118 accessions, 101 of L. sativus (100 cultivated accessions from Bangladesh and one wild accession) and 17 wild accessions of other Lathyrus species, were used. A total of 67 alleles were detected, with an average of 3.72 alleles per locus and average polymorphism information content of 0.52. A dissimilarity matrix was formed and hierarchical cluster analysis performed using the UPGMA method grouped genotypes into four main clusters. Cluster analysis based on the genetic dissimilarity revealed a clear grouping of the 100 cultivated and 18 wild accessions into four main groups. Group I consisted of 20 accessions with high β-N-oxalyl-l-α,β-diaminopropionic acid (β-ODAP) concentration. Of these 20 accessions, 17 were wild accessions. Only one wild accession (L. cicera) was clustered in group II, which contained 35 accessions. Most of the group II accessions contained low β-ODAP. Group III was represented by 34 accessions, many of them with high β-ODAP. Group IV consisted of 29 accessions, a few of which had very high β-ODAP concentrations. Analysis of molecular variance of the microsatellite data showed significantly higher values of molecular variance between (83%) than within (17%) populations. These characterized accessions will be useful in grass pea breeding programs.