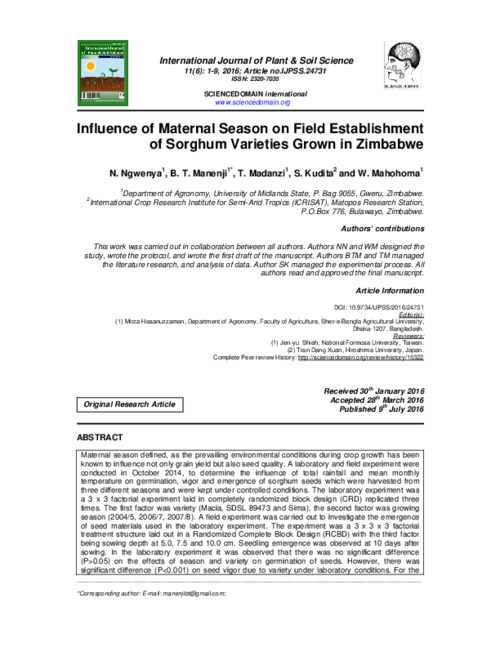 Maternal season defined, as the prevailing environmental conditions during crop growth has been known to influence not only grain yield but also seed quality. A laboratory and field experiment were conducted in October 2014, to determine the influence of total rainfall and mean monthly temperature on germination, vigor and emergence of sorghum seeds which were harvested from three different seasons and were kept under controlled conditions. The laboratory experiment was a 3 x 3 factorial experiment laid in completely randomized block design (CRD) replicated three times. The first factor was variety (Macia, SDSL 89473 and Sima), the second factor was growing season (2004/5, 2006/7, 2007/8). A field experiment was carried out to investigate the emergence of seed materials used in the laboratory experiment. The experiment was a 3 x 3 x 3 factorial treatment structure laid out in a Randomized Complete Block Design (RCBD) with the third factor being sowing depth at 5.0, 7.5 and 10.0 cm. Seedling emergence was observed at 10 days after sowing. In the laboratory experiment it was observed that there was no significant difference (P>0.05) on the effects of season and variety on germination of seeds. However, there was significant difference (P<0.001) on seed vigor due to variety under laboratory conditions. For the field experiment, there was significant interaction (P<0.001) on seedling emergence due to season, sowing depth and variety. The highest emergence for all varieties was observed at a sowing depth of 5cm. It can be concluded that maternal season, which is the season in which the seed was grown, has great influence on the vigor of seed produced under dry-land agriculture. There is need to repeat the experiment using more seed lots harvested at many different seasons in order to determine the exact optimum amount of rainfall and temperatures during the maternal season that will promote optimal germination and emergence of dry-land sorghum varieties.