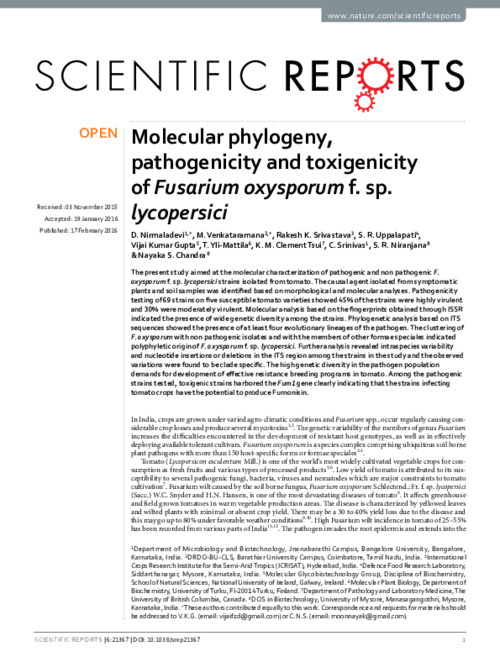 The present study aimed at the molecular characterization of pathogenic and non pathogenic F. oxysporum f. sp. lycopersici strains isolated from tomato. The causal agent isolated from symptomatic plants and soil samples was identified based on morphological and molecular analyses. Pathogenicity testing of 69 strains on five susceptible tomato varieties showed 45% of the strains were highly virulent and 30% were moderately virulent. Molecular analysis based on the fingerprints obtained through ISSR indicated the presence of wide genetic diversity among the strains. Phylogenetic analysis based on ITS sequences showed the presence of at least four evolutionary lineages of the pathogen. The clustering of F. oxysporum with non pathogenic isolates and with the members of other formae speciales indicated polyphyletic origin of F. oxysporum f. sp. lycopersici. Further analysis revealed intraspecies variability and nucleotide insertions or deletions in the ITS region among the strains in the study and the observed variations were found to be clade specific. The high genetic diversity in the pathogen population demands for development of effective resistance breeding programs in tomato. Among the pathogenic strains tested, toxigenic strains harbored the Fum1 gene clearly indicating that the strains infecting tomato crops have the potential to produce Fumonisin.