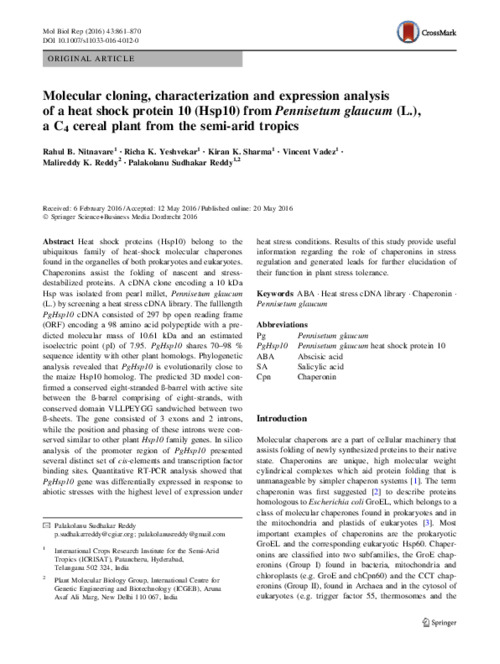 Heat shock proteins (Hsp10) belong to the ubiquitous family of heat-shock molecular chaperones found in the organelles of both prokaryotes and eukaryotes. Chaperonins assist the folding of nascent and stressdestabilized proteins. A cDNA clone encoding a 10 kDa Hsp was isolated from pearl millet, Pennisetum glaucum (L.) by screening a heat stress cDNA library. The fulllength PgHsp10 cDNA consisted of 297 bp open reading frame (ORF) encoding a 98 amino acid polypeptide with a predicted molecular mass of 10.61 kDa and an estimated isoelectric point (pI) of 7.95. PgHsp10 shares 70–98 % sequence identity with other plant homologs. Phylogenetic analysis revealed that PgHsp10 is evolutionarily close to the maize Hsp10 homolog. The predicted 3D model confirmed a conserved eight-stranded ß-barrel with active site between the ß-barrel comprising of eight-strands, with conserved domain VLLPEYGG sandwiched between two ß-sheets. The gene consisted of 3 exons and 2 introns, while the position and phasing of these introns were conserved similar to other plant Hsp10 family genes. In silico analysis of the promoter region of PgHsp10 presented several distinct set of cis-elements and transcription factor binding sites. Quantitative RT-PCR analysis showed that PgHsp10 gene was differentially expressed in response to abiotic stresses with the highest level of expression under heat stress conditions. Results of this study provide useful information regarding the role of chaperonins in stress regulation and generated leads for further elucidation of their function in plant stress tolerance