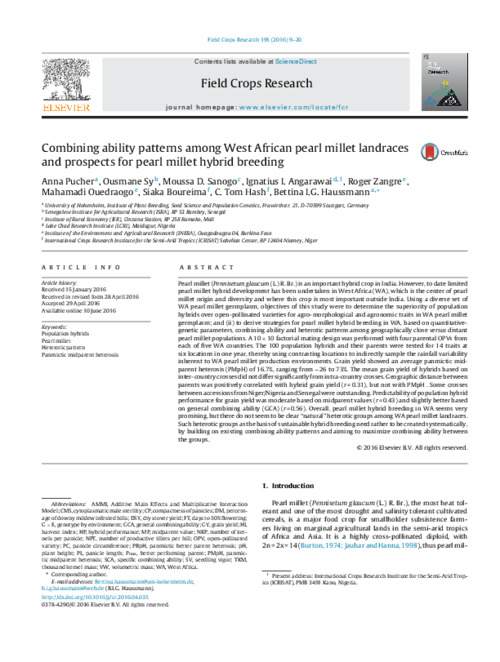 Pearl millet (Pennisetum glaucum (L.) R. Br.) is an important hybrid crop in India. However, to date limitedpearl millet hybrid development has been undertaken in West Africa (WA), which is the center of pearlmillet origin and diversity and where this crop is most important outside India. Using a diverse set ofWA pearl millet germplasm, objectives of this study were to determine the superiority of populationhybrids over open-pollinated varieties for agro-morphological and agronomic traits in WA pearl milletgermplasm; and (ii) to derive strategies for pearl millet hybrid breeding in WA, based on quantitative-genetic parameters, combining ability and heterotic patterns among geographically close versus distantpearl millet populations. A 10 × 10 factorial mating design was performed with four parental OPVs fromeach of five WA countries. The 100 population hybrids and their parents were tested for 14 traits atsix locations in one year, thereby using contrasting locations to indirectly sample the rainfall variabilityinherent to WA pearl millet production environments. Grain yield showed an average panmictic mid-parent heterosis (PMpH) of 16.7%, ranging from −26 to 73%. The mean grain yield of hybrids based oninter-country crosses did not differ significantly from intra-country crosses. Geographic distance betweenparents was positively correlated with hybrid grain yield (r = 0.31), but not with PMpH . Some crossesbetween accessions from Niger/Nigeria and Senegal were outstanding. Predictability of population hybridperformance for grain yield was moderate based on midparent values (r = 0.43) and slightly better basedon general combining ability (GCA) (r = 0.56). Overall, pearl millet hybrid breeding in WA seems verypromising, but there do not seem to be clear “natural” heterotic groups among WA pearl millet landraces.Such heterotic groups as the basis of sustainable hybrid breeding need rather to be created systematically,by building on existing combining ability patterns and aiming to maximize combining ability betweenthe groups.