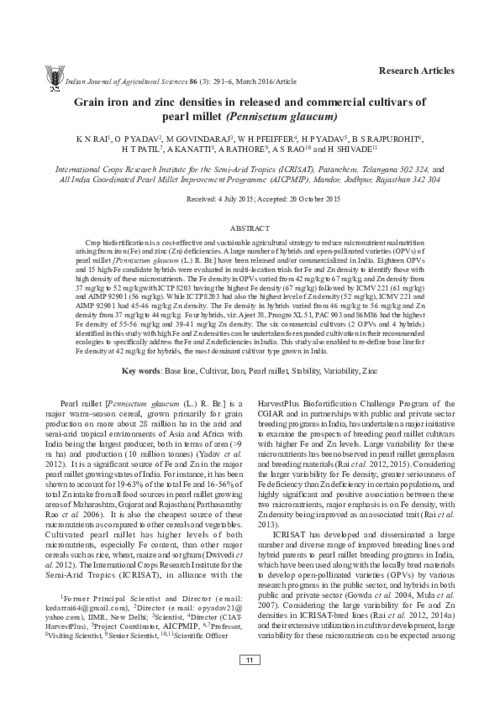 Crop biofortification is a cost-effective and sustainable agricultural strategy to reduce micronutrient malnutrition arising from iron (Fe) and zinc (Zn) deficiencies. A large number of hybrids and open-pollinated varieties (OPVs) of pearl millet [Pennisetum glaucum (L.) R. Br.] have been released and/or commercialized in India. Eighteen OPVs and 15 high-Fe candidate hybrids were evaluated in multi-location trials for Fe and Zn density to identify those with high density of these micronutrients. The Fe density in OPVs varied from 42 mg/kg to 67 mg/kg, and Zn density from 37 mg/kg to 52 mg/kg with ICTP 8203 having the highest Fe density (67 mg/kg) followed by ICMV 221 (61 mg/kg) and AIMP 92901 (56 mg/kg). While ICTP 8203 had also the highest level of Zn density (52 mg/kg), ICMV 221 and AIMP 92901 had 45-46 mg/kg Zn density. The Fe density in hybrids varied from 46 mg/kg to 56 mg/kg and Zn density from 37 mg/kg to 44 mg/kg. Four hybrids, viz. Ajeet 38, Proagro XL 51, PAC 903 and 86M86 had the highest Fe density of 55-56 mg/kg and 39-41 mg/kg Zn density. The six commercial cultivars (2 OPVs and 4 hybrids) identified in this study with high Fe and Zn densities can be undertaken for expanded cultivation in their recommended ecologies to specifically address the Fe and Zn deficiencies in India. This study also enabled to re-define base line for Fe density at 42 mg/kg for hybrids, the most dominant cultivar type grown in India.