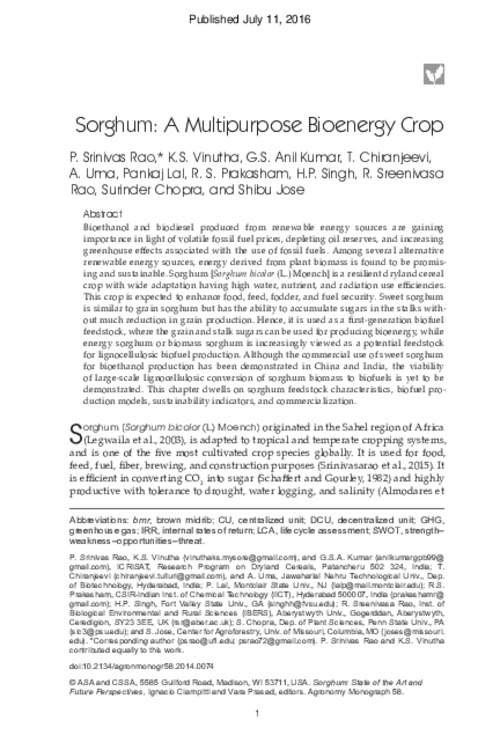 Bioethanol and biodiesel produced from renewable energy sources are gaining importance in light of volatile fossil fuel prices, depleting oil reserves, and increasing greenhouse effects associated with the use of fossil fuels. Among several alternative renewable energy sources, energy derived from plant biomass is found to be promising and sustainable. Sorghum [Sorghum bicolor (L.) Moench] is a resilient dryland cereal crop with wide adaptation having high water, nutrient, and radiation use efficiencies. This crop is expected to enhance food, feed, fodder, and fuel security. Sweet sorghum is similar to grain sorghum but has the ability to accumulate sugars in the stalks without much reduction in grain production. Hence, it is used as a first-generation biofuel feedstock, where the grain and stalk sugars can be used for producing bioenergy, while energy sorghum or biomass sorghum is increasingly viewed as a potential feedstock for lignocellulosic biofuel production. Although the commercial use of sweet sorghum for bioethanol production has been demonstrated in China and India, the viability of large-scale lignocellulosic conversion of sorghum biomass to biofuels is yet to be demonstrated. This chapter dwells on sorghum feedstock characteristics, biofuel production models, sustainability indicators, and commercialization.