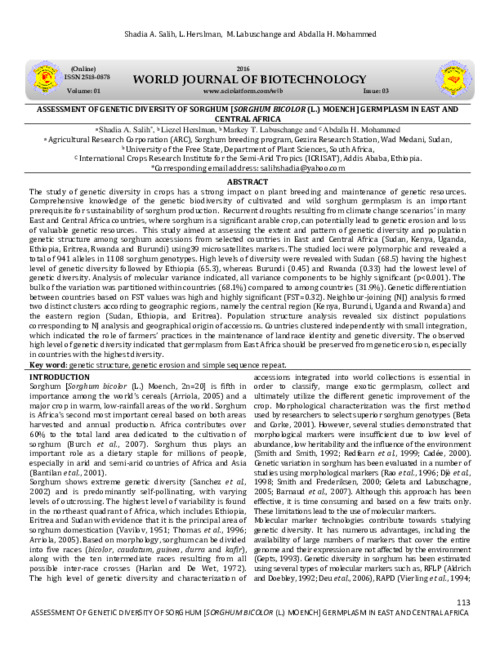 The study of genetic diversity in crops has a strong impact on plant breeding and maintenance of genetic resources. Comprehensive knowledge of the genetic biodiversity of cultivated and wild sorghum germplasm is an important prerequisite for sustainability of sorghum production. Recurrent droughts resulting from climate change scenarios’ in many East and Central Africa countries, where sorghum is a significant arable crop, can potentially lead to genetic erosion and loss of valuable genetic resources. This study aimed at assessing the extent and pattern of genetic diversity and population genetic structure among sorghum accessions from selected countries in East and Central Africa (Sudan, Kenya, Uganda, Ethiopia, Eritrea, Rwanda and Burundi) using39 microsatellites markers. The studied loci were polymorphic and revealed a total of 941 alleles in 1108 sorghum genotypes. High levels of diversity were revealed with Sudan (68.5) having the highest level of genetic diversity followed by Ethiopia (65.3), whereas Burundi (0.45) and Rwanda (0.33) had the lowest level of genetic diversity. Analysis of molecular variance indicated, all variance components to be highly significant (p<0.001). The bulk of the variation was partitioned within countries (68.1%) compared to among countries (31.9%). Genetic differentiation between countries based on FST values was high and highly significant (FST=0.32). Neighbour-joining (NJ) analysis formed two distinct clusters according to geographic regions, namely the central region (Kenya, Burundi, Uganda and Rwanda) and the eastern region (Sudan, Ethiopia, and Eritrea). Population structure analysis revealed six distinct populations corresponding to NJ analysis and geographical origin of accessions. Countries clustered independently with small integration, which indicated the role of farmers’ practices in the maintenance of landrace identity and genetic diversity. The observed high level of genetic diversity indicated that germplasm from East Africa should be preserved from genetic erosion, especially in countries with the highest diversity.