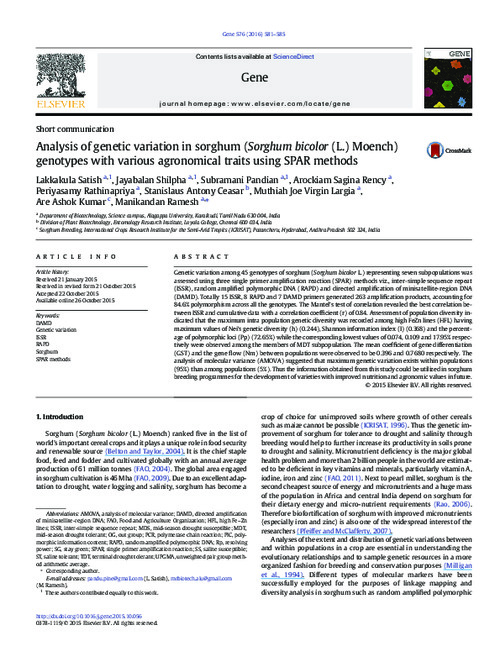 Genetic variation among 45 genotypes of sorghum (Sorghum bicolor L.) representing seven subpopulations was assessed using three single primer amplification reaction (SPAR) methods viz., inter-simple sequence repeat (ISSR), random amplified polymorphic DNA (RAPD) and directed amplification of minisatellite-region DNA (DAMD). Totally 15 ISSR, 8 RAPD and 7 DAMD primers generated 263 amplification products, accounting for 84.6% polymorphism across all the genotypes. The Mantel's test of correlation revealed the best correlation between ISSR and cumulative data with a correlation coefficient (r) of 0.84. Assessment of population diversity indicated that the maximum intra population genetic diversity was recorded among high FeZn lines (HFL) having maximum values of Nei's genetic diversity (h) (0.244), Shannon information index (I) (0.368) and the percentage of polymorphic loci (Pp) (72.65%) while the corresponding lowest values of 0.074, 0.109 and 17.95% respectively were observed among the members of MDT subpopulation. The mean coefficient of gene differentiation (GST) and the gene flow (Nm) between populations were observed to be 0.396 and 0.7680 respectively. The analysis of molecular variance (AMOVA) suggested that maximum genetic variation exists within populations (95%) than among populations (5%). Thus the information obtained from this study could be utilized in sorghum breeding programmes for the development of varieties with improved nutrition and agronomic values in future.