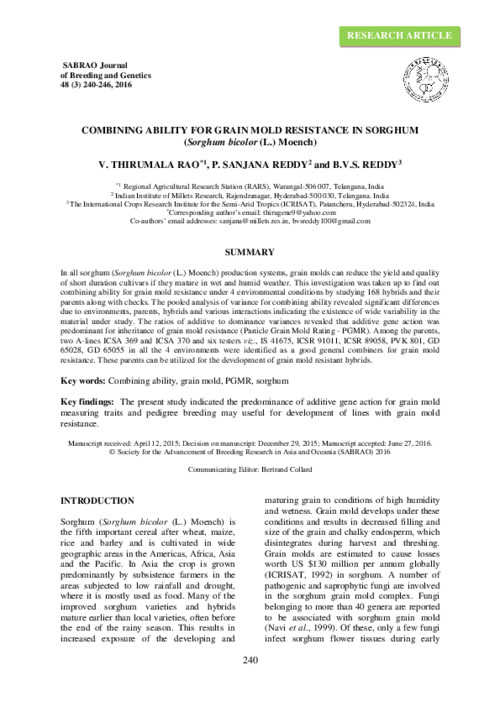 In all sorghum (Sorghum bicolor (L.) Moench) production systems, grain molds can reduce the yield and quality of short duration cultivars if they mature in wet and humid weather. This investigation was taken up to find out combining ability for grain mold resistance under 4 environmental conditions by studying 168 hybrids and their parents along with checks. The pooled analysis of variance for combining ability revealed significant differences due to environments, parents, hybrids and various interactions indicating the existence of wide variability in the material under study. The ratios of additive to dominance variances revealed that additive gene action was predominant for inheritance of grain mold resistance (Panicle Grain Mold Rating - PGMR). Among the parents, two A-lines ICSA 369 and ICSA 370 and six testers viz., IS 41675, ICSR 91011, ICSR 89058, PVK 801, GD 65028, GD 65055 in all the 4 environments were identified as a good general combiners for grain mold resistance. These parents can be utilized for the development of grain mold resistant hybrids