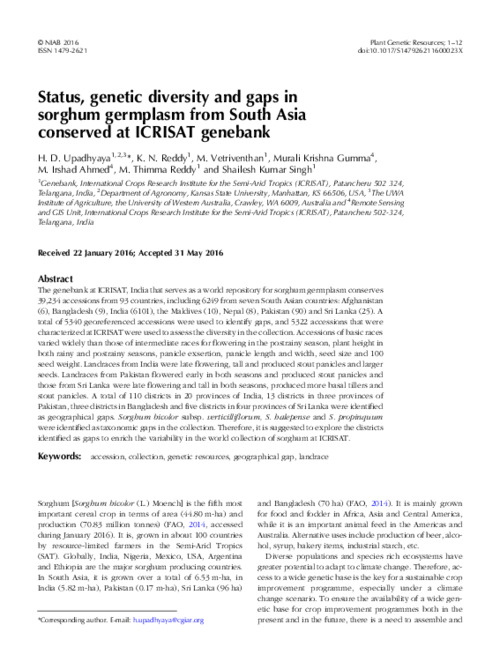 The genebank at ICRISAT, India that serves as a world repository for sorghum germplasm conserves 39,234 accessions from 93 countries, including 6249 from seven South Asian countries: Afghanistan (6), Bangladesh (9), India (6101), the Maldives (10), Nepal (8), Pakistan (90) and Sri Lanka (25). A total of 5340 georeferenced accessions were used to identify gaps, and 5322 accessions that were characterized at ICRISAT were used to assess the diversity in the collection. Accessions of basic races varied widely than those of intermediate races for flowering in the postrainy season, plant height in both rainy and postrainy seasons, panicle exsertion, panicle length and width, seed size and 100 seed weight. Landraces from India were late flowering, tall and produced stout panicles and larger seeds. Landraces from Pakistan flowered early in both seasons and produced stout panicles and those from Sri Lanka were late flowering and tall in both seasons, produced more basal tillers and stout panicles. A total of 110 districts in 20 provinces of India, 13 districts in three provinces of Pakistan, three districts in Bangladesh and five districts in four provinces of Sri Lanka were identified as geographical gaps. Sorghum bicolor subsp. verticilliflorum, S. halepense and S. propinquum were identified as taxonomic gaps in the collection. Therefore, it is suggested to explore the districts identified as gaps to enrich the variability in the world collection of sorghum at ICRISAT