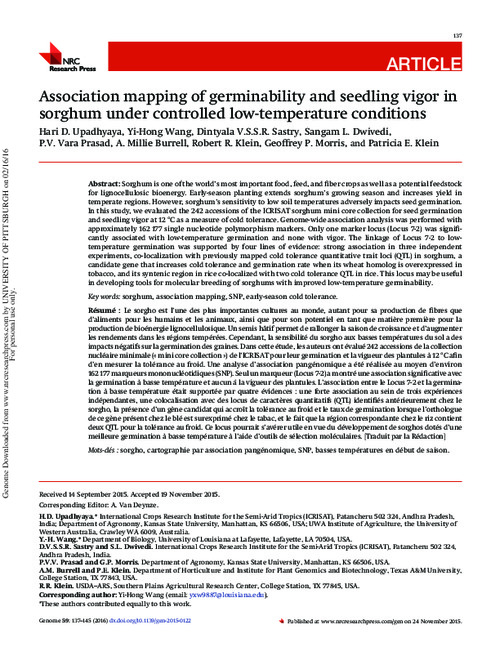 Sorghum is one of the world’s most important food, feed, and fiber crops as well as a potential feedstock for lignocellulosic bioenergy. Early-season planting extends sorghum’s growing season and increases yield in temperate regions. However, sorghum’s sensitivity to low soil temperatures adversely impacts seed germination. In this study, we evaluated the 242 accessions of the ICRISAT sorghum mini core collection for seed germination and seedling vigor at 12 °C as a measure of cold tolerance. Genome-wide association analysis was performed with approximately 162 177 single nucleotide polymorphism markers. Only one marker locus (Locus 7-2) was significantly associated with low-temperature germination and none with vigor. The linkage of Locus 7-2 to lowtemperature germination was supported by four lines of evidence: strong association in three independent experiments, co-localization with previously mapped cold tolerance quantitative trait loci (QTL) in sorghum, a candidate gene that increases cold tolerance and germination rate when its wheat homolog is overexpressed in tobacco, and its syntenic region in rice co-localized with two cold tolerance QTL in rice. This locus may be useful in developing tools for molecular breeding of sorghums with improved low-temperature germinability