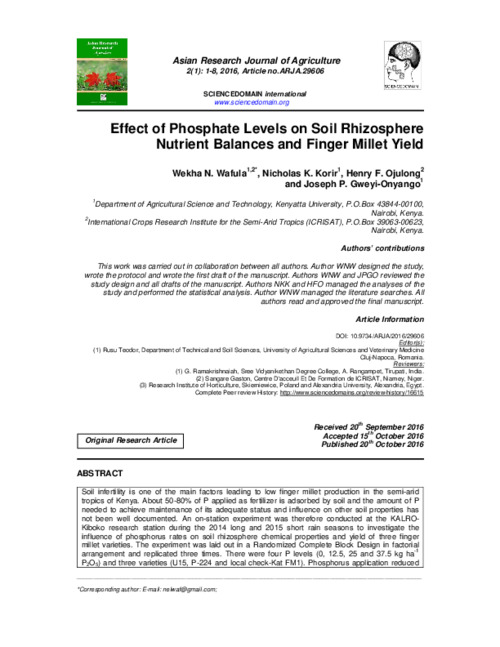 Soil infertility is one of the main factors leading to low finger millet production in the semi-arid tropics of Kenya. About 50-80% of P applied as fertilizer is adsorbed by soil and the amount of P needed to achieve maintenance of its adequate status and influence on other soil properties has not been well documented. An on-station experiment was therefore conducted at the KALROKiboko research station during the 2014 long and 2015 short rain seasons to investigate the influence of phosphorus rates on soil rhizosphere chemical properties and yield of three finger millet varieties. The experiment was laid out in a Randomized Complete Block Design in factorial arrangement and replicated three times. There were four P levels (0, 12.5, 25 and 37.5 kg ha-1 P2O5) and three varieties (U15, P-224 and local check-Kat FM1). Phosphorus application reduced the soil pH significantly for both seasons with the 37.5 kg ha-1 P2O5 rate eliciting the greatest pH from 9.26 to 7.90 (1.36 units) during the long rain season. As expected, soil phosphorus increased with the highest rate with 11 ppm during the long rain season and 9 ppm for the short rains. The organic carbon increased by 0.28% for the long rain season on the 25 kg ha-1 P2O5 rate while the highest rate increased total N by 0.05%. The 25 kg ha-1 P2O5 rate and U-15 indicated the highest yield for both seasons with a maximum of 3.71 t ha-1 realized during the short rain season. Monitoring change in soil nutrient status is important for prescribing P fertilization in order to maintain or replenish soil fertility. The application rate of 25 kg ha-1 P2O5 led to the optimal yields under the improved variety and hence the study recommends this rate.