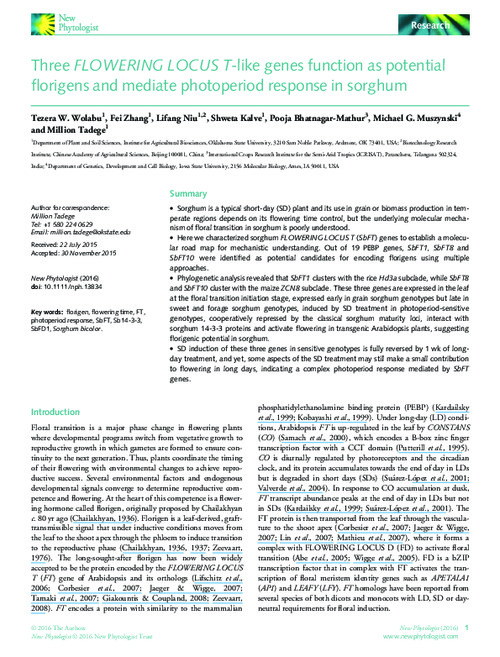 Sorghum is a typical short-day (SD) plant and its use in grain or biomass production in temperate regions depends on its flowering time control, but the underlying molecular mechanism of floral transition in sorghum is poorly understood. Here we characterized sorghum FLOWERING LOCUS T (SbFT) genes to establish a molecular road map for mechanistic understanding. Out of 19 PEBP genes, SbFT1, SbFT8 and SbFT10 were identified as potential candidates for encoding florigens using multiple approaches. Phylogenetic analysis revealed that SbFT1 clusters with the rice Hd3a subclade, while SbFT8 and SbFT10 cluster with the maize ZCN8 subclade. These three genes are expressed in the leaf at the floral transition initiation stage, expressed early in grain sorghum genotypes but late in sweet and forage sorghum genotypes, induced by SD treatment in photoperiod-sensitive genotypes, cooperatively repressed by the classical sorghum maturity loci, interact with sorghum 14-3-3 proteins and activate flowering in transgenic Arabidopsis plants, suggesting florigenic potential in sorghum. SD induction of these three genes in sensitive genotypes is fully reversed by 1 wk of longday treatment, and yet, some aspects of the SD treatment may still make a small contribution to flowering in long days, indicating a complex photoperiod response mediated by SbFT genes.