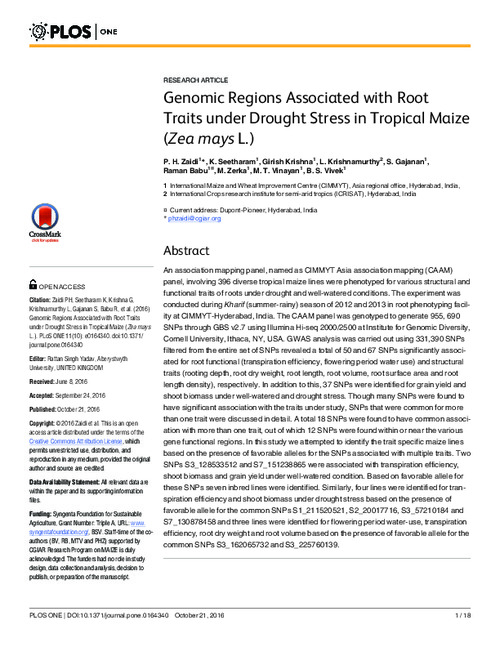 An association mapping panel, named as CIMMYT Asia association mapping (CAAM) panel, involving 396 diverse tropical maize lines were phenotyped for various structural and functional traits of roots under drought and well-watered conditions. The experiment was conducted during Kharif (summer-rainy) season of 2012 and 2013 in root phenotyping facility at CIMMYT-Hyderabad, India. The CAAM panel was genotyped to generate 955, 690 SNPs through GBS v2.7 using Illumina Hi-seq 2000/2500 at Institute for Genomic Diversity, Cornell University, Ithaca, NY, USA. GWAS analysis was carried out using 331,390 SNPs filtered from the entire set of SNPs revealed a total of 50 and 67 SNPs significantly associated for root functional (transpiration efficiency, flowering period water use) and structural traits (rooting depth, root dry weight, root length, root volume, root surface area and root length density), respectively. In addition to this, 37 SNPs were identified for grain yield and shoot biomass under well-watered and drought stress. Though many SNPs were found to have significant association with the traits under study, SNPs that were common for more than one trait were discussed in detail. A total 18 SNPs were found to have common association with more than one trait, out of which 12 SNPs were found within or near the various gene functional regions. In this study we attempted to identify the trait specific maize lines based on the presence of favorable alleles for the SNPs associated with multiple traits. Two SNPs S3_128533512 and S7_151238865 were associated with transpiration efficiency, shoot biomass and grain yield under well-watered condition. Based on favorable allele for these SNPs seven inbred lines were identified. Similarly, four lines were identified for transpiration efficiency and shoot biomass under drought stress based on the presence of favorable allele for the common SNPs S1_211520521, S2_20017716, S3_57210184 and S7_130878458 and three lines were identified for flowering period water-use, transpiration efficiency, root dry weight and root volume based on the presence of favorable allele for the common SNPs S3_162065732 and S3_225760139.