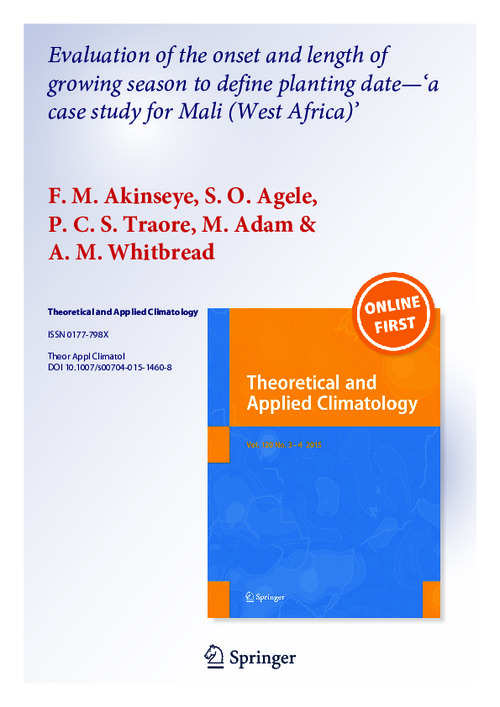 The agroecological zones (AEZ) of Mali fall within the semi-arid climate, the ability to determine efficiently or predict accurately the onset of growing season (OGS), and length of growing season (LGS) cannot be over-emphasized due to highly variable rainfall pattern and the dependence of smallholder farmers practising on rainfed farming agriculture. In this study, we determined the most suitable method for predicting the onset date of rainfall across AEZ that fitted with the planting windows of major cereal crops (maize, millet, and sorghum). Using long-term daily rainfall records from 22 meteorological stations spread across AEZ of Mali, four (4) known methods were applied to determine the onset dates of the rain. The mean onset dates were statistically compared with the farmer’s planting window for the selected weather stations to determine the suitable dates of OGS and LGS. The hypothesis considered a time lag minimum of 7 days between the mean onset date and traditional farmer sowing dates for the crops. Then, the preferred method was used to estimate OGS based on early, normal and late dates respectively across the stations. Also, the estimated LGS according to each zone was evaluated using probability distribution chart with duration to maturity for varieties of the same crops. The results showed that Def_4 was found appropriate for Sahelian and Sudano-Sahelian zones; Def_3 satisfied the criteria and exhibited superior capacity into farmer’s average planting date over Sudanian and Guinea Savannah zones. These results have an important application in cropping systems in order to prevent crop failure and ensure a better choice of crop variety according to LGS under climate variability and change being experienced across Mali.