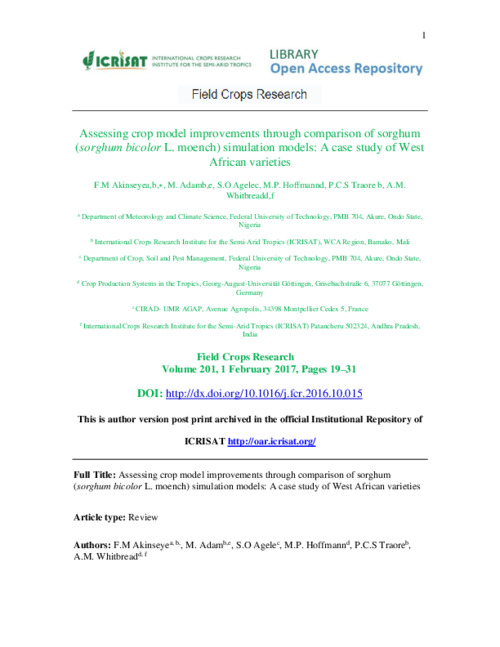 Better defining niches for the photoperiod sensitive sorghum (Sorghum bicolor L. Moench) varieties ofWest Africa into the local cropping system might help to improve the resilience of food production in theregion. In particular, crop models are key tools to assess the growth and development of such varietiesagainst climate and soil variability. In this study, we compared the performance of three process-basedcrop models (APSIM, DSSAT and Samara) for prediction of diverse sorghum germplasm having widelyvarying photoperiod sensitivity (PPS) using detailed growth and development observations from fieldtrials conducted in West Africa semi-arid region. Our results confirmed the capability of each selectedmodel to reproduce growth and development for varieties of diverse sensitivities to photoperiod. Simu-lated phenology and morphology organs during calibration and validation were within the closet rangeof measured values with the evaluation of model error statistics (RMSE and R2). With the exceptionof highly sensitive variety (IS15401), APSIM and Samara estimates indicate the lowest value of RMSE(<7days) against the observed values for phenology events (flowering and maturity) compared to DSSATmodel. Across the varieties, there was over-estimation for simulated leaf area index (LAI) while totalleaf number (TLN) fitted well with the observed values. Samara estimates were found to be the closetwith the lowest RMSE values (<3 leaves for TLN and <1.0 m2/m2for LAI) followed by DSSAT and APSIMrespectively. Prediction of grain yield and biomass was less accurate for both calibration and validation.The predictions using APSIM were found to be closest to the observed followed by DSSAT and Samaramodels respectively. Based on detailed field observations, this study showed that crop models capturedwell the phenology and leaf development of the photoperiod sensitive (PPS) varieties of West Africa, butfailed to estimate accurately partitioning of assimilates during grain filling. APSIM and SAMARA as moremechanistic crop models, have a higher sensitivity of the adjustment of key parameters, notably thespecific leaf area for APSIM in low PPS varieties, while SAMARA shows a higher response to parameterschanges for high PPS varieties.