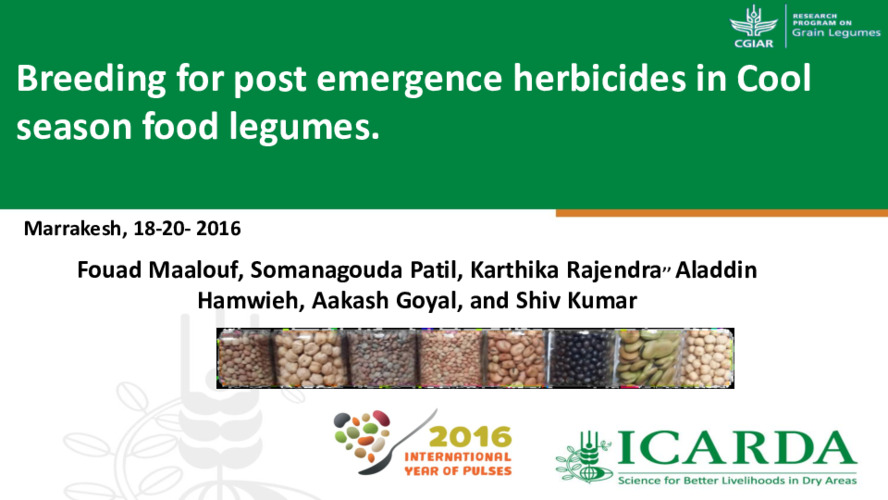 Cool-season food legumes (faba bean, chickpea and lentils) are mostly grown in rainfed dryland systems, because of many virtues such as high protein content, atmospheric nitrogen fixation, and low carbon and water foot prints. When grown in rotation with cereals, these crops also act as a break in disease cycles. However, annual and parasitic weeds are the major production constraints in this group of crops because of slow initial growth and being poor competitor to weeds. Manual weeding is laborious and time consuming. Pre-emergence herbicide application is effective but application of post-emergence herbicides is not safe due to crop sensitivity. In addition food legumes are heavily infested by Orobanche crenata in North and East Africa. Faba bean cultivars with resistance to orobanche have been developed in Egypt, Ethiopia and Tunisia, but the resistance is partial and consequently there is a need to develop integrated management with herbicide tolerance such as low dosage of Glyphosate. Sources for resistance to different herbicides in faba bean, chickpea and lentils were identified. At ICARDA, 289 mutant lines of faba bean were screened against high dosage of Glyphosate, resulting in identification of two lines Mu38 and Mu418 as tolerant to 1600 g a.i./ha. Similarly, 300 faba bean lines were screened against various post-emergence herbicides with different modes of action like Metribuzin, Imazethapyr and Oxyflourfen and 10 lines were found highly tolerant to Imazethapyr, and 8 to Metribuzin. In lentil, 353 genotypes were screened for tolerance to Metribuzin and Imazethapyr. Highly tolerant genotypes identified included ILL8112, ILL5988, ILL8009 and ILL4994 for Imazethapyr and ILL1005, ILL0462, ILL5531, ILL6434, ILL0195, GCP10 and 06S 53110-02 for Metribuzin. Similarly, in chickpea, screening of 49 genotypes, including germplasm accessions and advanced breeding lines, against Imazethapyr and Metribuzin and resulting in identification of 10 genotypes tolerance to Imazethapyr and two for Metribuzin. These sources are used in breeding program to transfer genes for resistance to cultivars grown in different agro ecological zones.