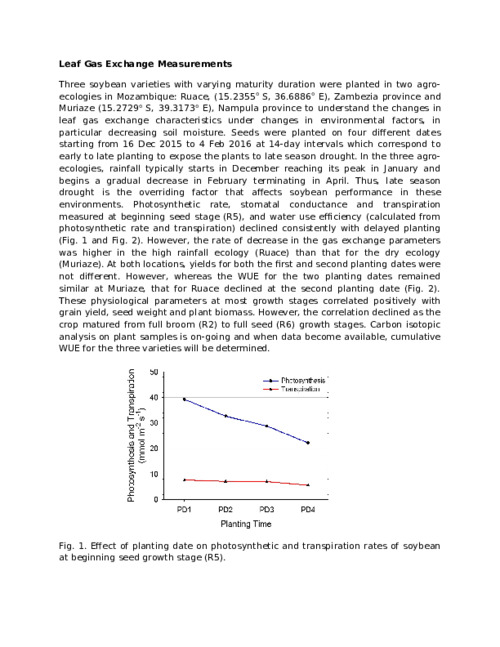 Three soybean varieties with varying maturity duration were planted in two agro-ecologies in Mozambique: Ruace, (15.2355o S, 36.6886o E), Zambezia province and Muriaze (15.2729o S, 39.3173o E), Nampula province to understand the changes in leaf gas exchange characteristics under changes in environmental factors, in particular decreasing soil moisture. Seeds were planted on four different dates starting from 16 Dec 2015 to 4 Feb 2016 at 14-day intervals which correspond to early to late planting to expose the plants to late season drought. In the three agro-ecologies, rainfall typically starts in December reaching its peak in January and begins a gradual decrease in February terminating in April. Thus, late season drought is the overriding factor that affects soybean performance in these environments. Photosynthetic rate, stomatal conductance and transpiration measured at beginning seed stage (R5), and water use efficiency (calculated from photosynthetic rate and transpiration) declined consistently with delayed planting (Fig. 1 and Fig. 2). However, the rate of decrease in the gas exchange parameters was higher in the high rainfall ecology (Ruace) than that for the dry ecology (Muriaze). At both locations, yields for both the first and second planting dates were not different. However, whereas the WUE for the two planting dates remained similar at Muriaze, that for Ruace declined at the second planting date (Fig. 2). These physiological parameters at most growth stages correlated positively with grain yield, seed weight and plant biomass. However, the correlation declined as the crop matured from full broom (R2) to full seed (R6) growth stages. Carbon isotopic analysis on plant samples is on-going and when data become available, cumulative WUE for the three varieties will be determined.