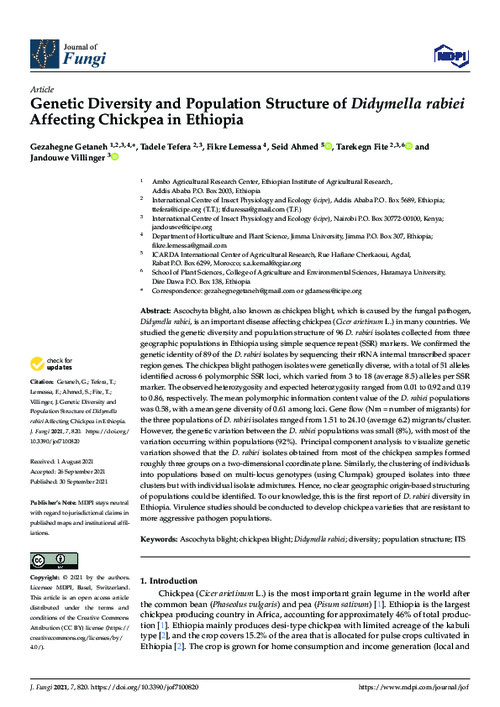 Ascochyta blight, also known as chickpea blight, which is caused by the fungal pathogen, Didymella rabiei, is an important disease affecting chickpea (Cicer arietinum L.) in many countries. We studied the genetic diversity and population structure of 96 D. rabiei isolates collected from three geographic populations in Ethiopia using simple sequence repeat (SSR) markers. We confirmed the genetic identity of 89 of the D. rabiei isolates by sequencing their rRNA internal transcribed spacer region genes. The chickpea blight pathogen isolates were genetically diverse, with a total of 51 alleles identified across 6 polymorphic SSR loci, which varied from 3 to 18 (average 8.5) alleles per SSR marker. The observed heterozygosity and expected heterozygosity ranged from 0.01 to 0.92 and 0.19 to 0.86, respectively. The mean polymorphic information content value of the D. rabiei populations was 0.58, with a mean gene diversity of 0.61 among loci. Gene flow (Nm = number of migrants) for the three populations of D. rabiei isolates ranged from 1.51 to 24.10 (average 6.2) migrants/cluster. However, the genetic variation between the D. rabiei populations was small (8%), with most of the variation occurring within populations (92%). Principal component analysis to visualize genetic variation showed that the D. rabiei isolates obtained from most of the chickpea samples formed roughly three groups on a two-dimensional coordinate plane. Similarly, the clustering of individuals into populations based on multi-locus genotypes (using Clumpak) grouped isolates into three clusters but with individual isolate admixtures. Hence, no clear geographic origin-based structuring of populations could be identified. To our knowledge, this is the first report of D. rabiei diversity in Ethiopia. Virulence studies should be conducted to develop chickpea varieties that are resistant to more aggressive pathogen populations.