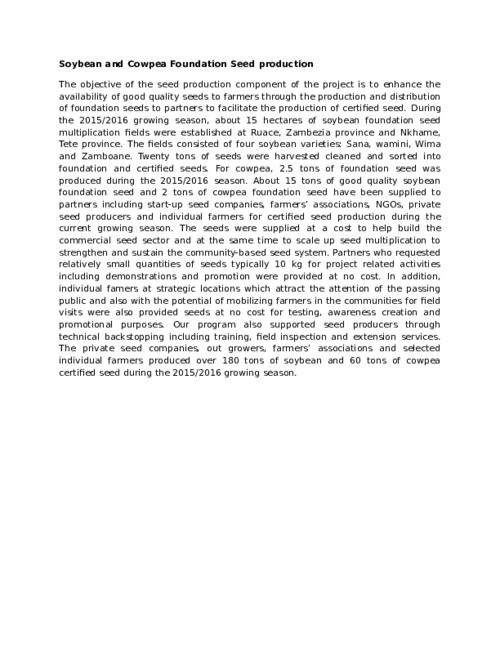 The objective of the seed production component of the project is to enhance the availability of good quality seeds to farmers through the production and distribution of foundation seeds to partners to facilitate the production of certified seed. During the 2015/2016 growing season, about 15 hectares of soybean foundation seed multiplication fields were established at Ruace, Zambezia province and Nkhame, Tete province. The fields consisted of four soybean varieties: Sana, wamini, Wima and Zamboane. Twenty tons of seeds were harvested cleaned and sorted into foundation and certified seeds. For cowpea, 2.5 tons of foundation seed was produced during the 2015/2016 season. About 15 tons of good quality soybean foundation seed and 2 tons of cowpea foundation seed have been supplied to partners including start-up seed companies, farmers’ associations, NGOs, private seed producers and individual farmers for certified seed production during the current growing season. The seeds were supplied at a cost to help build the commercial seed sector and at the same time to scale up seed multiplication to strengthen and sustain the community-based seed system. Partners who requested relatively small quantities of seeds typically 10 kg for project related activities including demonstrations and promotion were provided at no cost. In addition, individual famers at strategic locations which attract the attention of the passing public and also with the potential of mobilizing farmers in the communities for field visits were also provided seeds at no cost for testing, awareness creation and promotional purposes. Our program also supported seed producers through technical backstopping including training, field inspection and extension services. The private seed companies, out growers, farmers’ associations and selected individual farmers produced over 180 tons of soybean and 60 tons of cowpea certified seed during the 2015/2016 growing season.