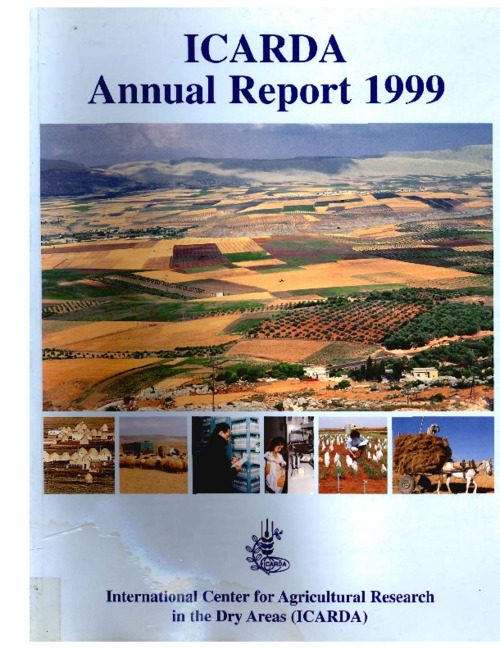 Agricultural systems in the dry areas are dynamic. Global linking of national economies, along with urban market development, is creating new, more intensive and more diverse demands on agricultural producers. Shaping change in the research strategy of an international center in a globalizing world is, therefore, no more an easy task. In 1999, the Fourth External Program and Management Review (EPNIR) panel assessed ICARDA's success in dealing with this task. The Panel, consisting of eight international experts and chaired by Dr Donald Plucknett, examined ICARDA's mandate and mission, research and training programs, and management structure and policies, and found that the "Center had been transformed over the last five years and was now ready to take off into 2000." It highlighted once again the pressing need for the continuation of the agricultural research and capacity building carried out by ICARDA as the center of excellence in the dry areas. The Panel singled out water as the most important ingredient to consider in the Center's work in crop improvement and natural resource management. In the dry areas of Central and West Asia and North Africa (CWANA), water-not land-is the most limiting factor for agricultural production. ICARDA's research has demonstrated that substantial stable increases over rainfed wheat production are possible through the use of supplemental irrigation (SI). Now optimization studies with farmers have shown that water used for SI conjunctively with rain is far more efficient than when applied alone in full irrigation. The studies show that guidelines for determining irrigation water requirements in areas with limited water resources should not be based on satisfying full crop water requirements, but rather on maximizing water productivity and farmers' return. The Center continues to make increased use of the Geographic Information Systems (GIs) in enhancing water-use efficiency. A project to study the agroecology of the CWANA region has been started, and a digital Agroecological Atlas of Syria is being developed. ICARDA is also providing technical assistance to Morocco, which plans to produce land suitability maps for planning and policy needs. Drought is one of the key stresses at the forefront of crop variety improvement, and ICARDA continues to develop improved drought-tolerant barley, wheat, and food and feed legume germplasm in collaboration with its national partners. Studies measuring the impact of ICARDA's germplasm program in developing countries confirm that 54% of the barley varieties released in 23 developing countries from 1980 to 1999 originated from ICARDA crosses. Half of the 52 lentil varieties released in 22 countries were from crosses made by ICARDA, while a further 3 1% were attributable to ICARDA germplasm. Activities in Central Asia are now closely woven into the Center's program of work. Several projects are being implemented, including the 'Integrated Feed and Livestock Production in the Steppe of Central Asia,' supported by the International Fund for Agricultural Development (IFAD). This is particularly vital, given the breakdown of the earlier system of livestock production, support services such as veterinary care, and traditional markets in Central Asia and the Caucasus. On the other hand, the entire CWANA region stands to benefit from the results of the 'Conservation and Sustainable Use of Dryland Agrobiodiversity' project, supported by the Global Environment Facility (GEF) of the United Nations Development Programme, in which Jordan, Lebanon. Syria and Palestine are participating. lCARDA has taken the lead role in its implementation on two sites in each country where farmer and community participation will conserve landraces and crop wild progenitors in situ. The EPMR Panel gave a vote of confidence to ICARDA for its ability to undertake these and other tasks aimed at reversing the cruel impacts of poverty. Statistics painfully reveal that more than two billion people in the world are malnourished, and in the dry areas nearly 700 million must eke a living out of US$ 2 per day. At lCARDA we are at the forefront of the battle against the misery that poverty and hunger cause, and we remain steadfast in our determination to provide scientific and technological solutions to alleviate this misery in the dry areas of the world. It was in recognition of ICARDA's capability to meet this challenge that the External Program and Management Review Panel, in its report to the CGIAR, stated that: "ICARDA is a Center in successful transition and one that is perhaps needed more in CWANA now than when it was founded in 1977."