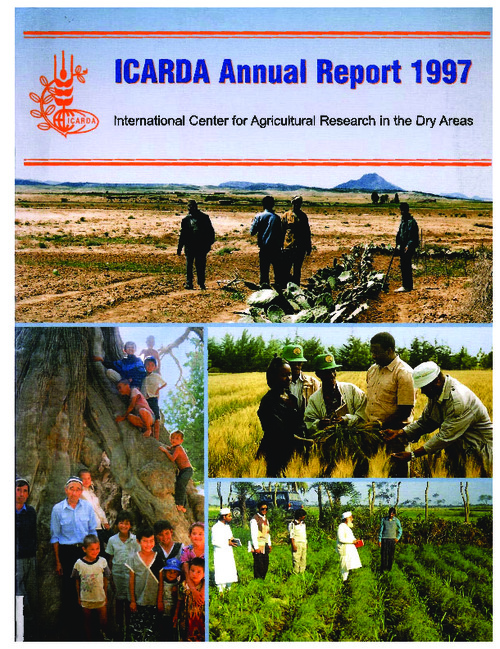 The year 1997 was an important milestone in ICARDA’s life as it marked the 20th anniversary of the Center. It was a year for reflecting on the past—and looking forward. If one were to identify the most significant achievement of ICARDA over the past 20 years, it is the close partnerships with national programs worldwide, particularly in the West Asia and North Africa region, for which the Center has been commended by its peers. With feedback from its partners, ICARDA’s research program has continued to evolve to jointly address the key problems of increasing agricultural productivity, alleviating poverty, and developing human resources in the dry areas. By 1997 ICARDA had entered into 80 formal agreements for collaboration with ministries of agriculture and environment, universities, and advanced research institutes throughout the world. Of the progress made through these partnerships, three major achievements deserve a mention here. By 1997, over 442 varieties of ICARDA-mandated cereal, legume, and pasture and forage crops had been released by our national partners for their farmers in Asia, Africa, Latin America, and several industrialized countries. The new, high-yielding varieties possess resistance to diseases and pests, and tolerance to environmental stresses. With policy and extension services support from national governments, and combined with improved, environmentally- friendly production practices, these varieties have helped change the face of agriculture in several countries.