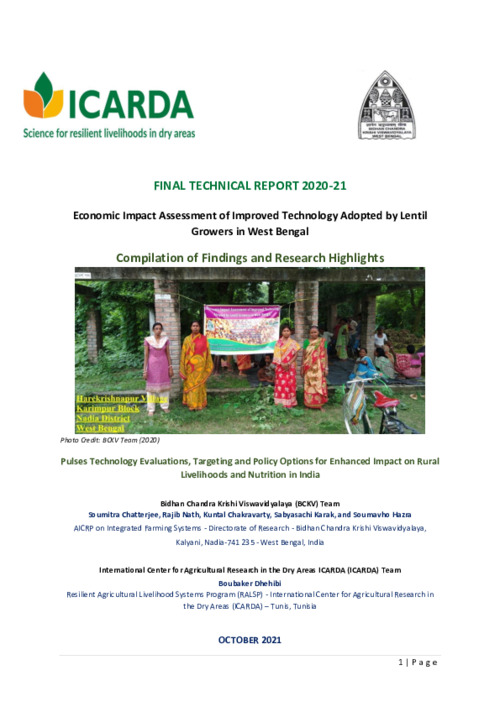 An unsatisfactory gain in pulse productivity since last six decades in India emerges severe threat to the overall food and nutritional security and also resilient livelihood of the nation. Due to failure of National Food Security Mission, International Centre for Agriculture Research in the Dry Areas (ICARDA) has started a multi-disciplinary project to enhance lentil productivity under rice-based cropping systems in West Bengal India. The present study attempts to evaluate the economic impact of ICARDA with regards to change in lentil productivity, level of input use and key factor contributor with respect to traditional lentil growers. All-over a sample of 347 farm households was surveyed in eight major lentil producing districts. There was a 36.61% estimated change in lentil productivity under ICARDA over traditional growers where the technological change has contributed 31.81% and gap due to technical substitution of input covered 4.81% change. Proper land preparation, quality seed use and better disease pest management became the prime factor behind the enhancement of lentil productivity. Overall cost benefit ratio for lentil has registered 1.25 for ICARDA and 0.74 for the traditional cultivators. Regarding varietal adoption of Lentil cultivators across various pockets of West Bengal, 29 variables have been selected purposively to judge the adoption criteria. It was observed after surveying of 135 farm households yet in the second year that the average age group of the farm-family head is between 40-60 years with education up to primary level where year of farming experience became the prime contributor regarding technology adoption of farm households where 90% farm households belong to low and poor economic status. Regarding varietal preferences and choices of lentil among the growers, majority of the farm family has adopted Moitreyee followed by Bari-7, PL-6 and HULL-57 with certified seed of germination percentage in between 71-80%. Average seed rate the farmers used to apply in the field is 31 kgha1 with total operational cost Rs. 24,731/- per hectare. Average production in 0.19 ha of land with medium fertility status under lentil cultivation per farm was registered 181 kg where 40 kg used as their yearly consumption purposes and 141 kg sold to the local market. Average transportation cost to sell seeds is recorded Rs. 163/- with middlemen share of Rs. 249/- on an average in every time. The price was recorded Rs. 53/- per kg of seed. Each farm-family consists of five members on an average has an average annual expenditure of Rs. 57,868/- with daily intake of pulses amounting to71 gday 1 family-1