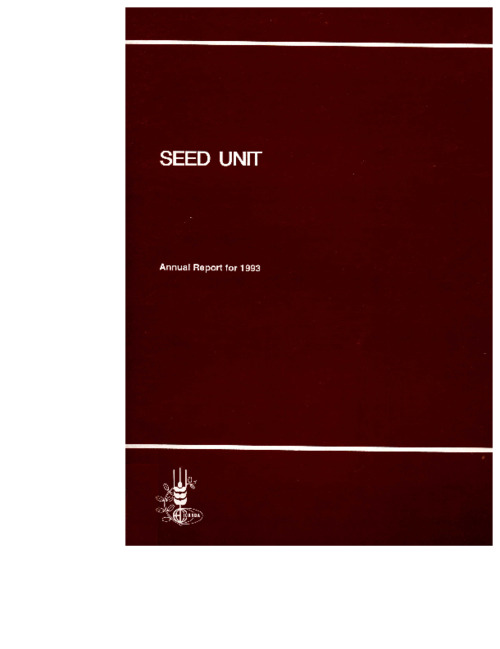 To strengthen seed programs in West Asia and North Africa a special project "Development of National Seed Production Capabilities in West Asia and North Africa" is funded by the Governments of the Netherlands and the Federal Republic of Germany. The Seed Unit of ICARDA implements this project, which has the objective of strengthening the national seed production organizations in West Asia and North Africa through (1) training regional seed production staff, (2) building up seed production infrastructure in the countries of the region, (3) making available limited quantities of high-quality seed of new varieties of cereals, food legumes and medics for national programs, (4) dissemination of information, and (5) carrying out regional seed technology research. The present report describes the progress made during 1993. The highlights of 1993 are: - The project to establish an M.Sc. program in Seed Science and Technology at the University of Jordan (UoJ) has been approved by EC and the M.Sc. course will be announced in the near future. Ten students holding a B.Sc. degree in agriculture will be eligible for an EC grant. - The Egypt national in-country train-the-trainers program has been completed; during a period of three years 11 1 field inspectors were trained in field inspection methodology as the direct result of Roundtable Discussions on Seed Quality Control organized in 1989 among experts from CAS, ARC, GTZ, NARP, and ICARDA. This program has been an example of cooperation between national programs (CAS, ARC), donors (GTZ, NARP), and ICARDA. Moreover, this program has shown that, if the methodology is clearly defined and described, B.Sc and M.Sc. trainers can take the lead in technology transfer without much technical support from outside. - The WANA seed network established in June 1992 is steadily progressing. It has participation from 17 countries in West Asia and North Africa and carries out activities that aim at improving national seed systems in the WANA region. - The first Forage Seed Production Course was organized in cooperation with the International Livestock Center for Africa (ILCA).