Rainfed Farming System of the Near East Region 1986 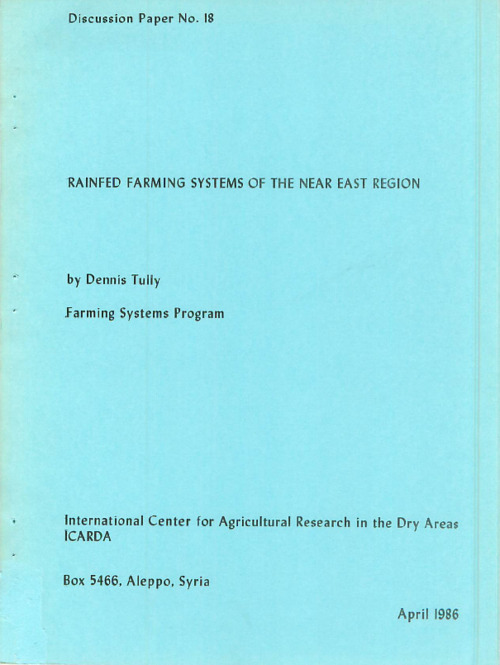 Rainfed farming systems of the Mediterranean Basin share many features and also resemble those of the Arabian Peninsula in some respects. In the region, agriculture plays an important role in employing and feeding much of the population. In general, there is a duality in the distribution of farmlands; the majority of farms are small but large farms occupy much of the land. The latter are frequently under state control and may have different resources and priorities than small farms. Subsistence production is relatively important on small farms, as is diversification among crop production, livestock, and off-farm work; large farms are more specialized in crop production for sale. Thus different technologies and policies may be required to reach large and small farms. Cereals are the main rainfed crops, followed by pulses and summer crops. Winter cereals are most commonly grown in rotation with a winter fallow; this may be left weedy to feed livestock, or cultivated to conserve moisture and nutrients while controlling weeds. Crop production is extensively mechanized but implements and practices vary considerably throughout the region. Small farms make use of mechanical techniques through custom services. Livestock plays an important role in the system, especially for small farms. They provide dairy products and meat both for consumption and for sale. They contribute a large proportion of farm income and act as a buffer in years of low crop production. In large part, they are fed by-products of food crop production. Although in winter they must often be fed barley grain. In large part, the health of the agricultural sector depends on government policy. Recent years have seen an increase in support for agriculture, including rainfed areas.