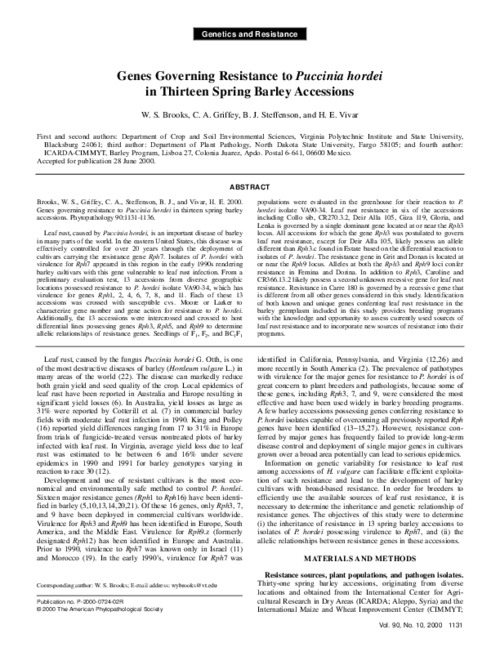 Leaf rust, caused by Puccinia hordei, is an important disease of barley in many parts of the world. In the eastern United States, this disease was effectively controlled for over 20 years through the deployment of cultivars carrying the resistance gene Rph7. Isolates of P. hordei with virulence for Rph7 appeared in this region in the early 1990s rendering barley cultivars with this gene vulnerable to leaf rust infection. From a preliminary evaluation test, 13 accessions from diverse geographic locations possessed resistance to P. hordei isolate VA90-34, which has virulence for genes Rph1, 2, 4, 6, 7, 8, and 11. Each of these 13 accessions was crossed with susceptible cvs. Moore or Larker to characterize gene number and gene action for resistance to P. hordei. Additionally, the 13 accessions were intercrossed and crossed to host differential lines possessing genes Rph3, Rph5, and Rph9 to determine allelic relationships of resistance genes. Seedlings of F-1, F-2, and BC1F1 populations were evaluated in the greenhouse for their reaction to P. hordei isolate VA90-34. Leaf rust resistance in six of the accessions including Collo sib, CR270.3.2, Deir Alla 105, Giza 119, Gloria, and Lenka is governed by a single dominant gene located at or near the Rph3 locus. All accessions for which the gene Rph3 was postulated to govern leaf rust resistance, except for Deir Alla 105, likely possess an allele different than Rph3.c found in Estate based on the differential reaction to isolates of P. hordei. The resistance gene in Grit and Donan is located at or near the Rph9 locus. Alleles at both the Rph3 and Rph9 loci confer resistance in Femina and Dorina. In addition to Rph3, Caroline and CR366.13.2 likely possess a second unknown recessive gene for leaf rust resistance. Resistance in Carre 180 is governed by a recessive gene that is different from all other genes considered in this study. Identification of both known and unique genes conferring leaf rust resistance in the barley germplasm included in this study provides breeding programs with the knowledge and opportunity to assess currently used sources of leaf rust resistance and to incorporate new sources of resistance into their programs.