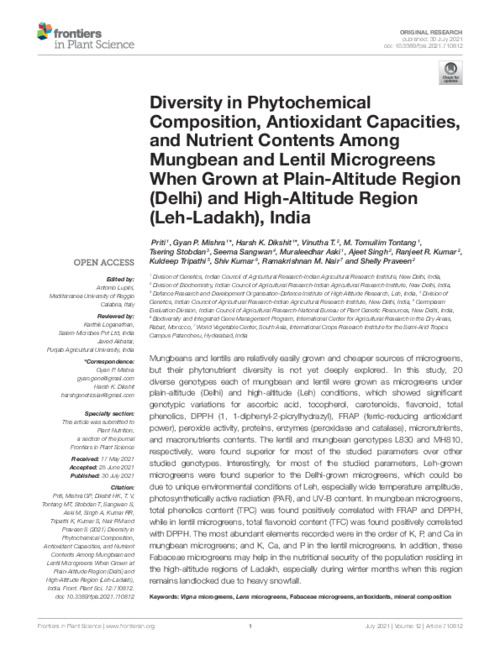 Mungbeans and lentils are relatively easily grown and cheaper sources of microgreens, but their phytonutrient diversity is not yet deeply explored. In this study, 20 diverse genotypes each of mungbean and lentil were grown as microgreens under plain-altitude (Delhi) and high-altitude (Leh) conditions, which showed significant genotypic variations for ascorbic acid, tocopherol, carotenoids, flavonoid, total phenolics, DPPH (1, 1-diphenyl-2-picrylhydrazyl), FRAP (ferric-reducing antioxidant power), peroxide activity, proteins, enzymes (peroxidase and catalase), micronutrients, and macronutrients contents. The lentil and mungbean genotypes L830 and MH810, respectively, were found superior for most of the studied parameters over other studied genotypes. Interestingly, for most of the studied parameters, Leh-grown microgreens were found superior to the Delhi-grown microgreens, which could be due to unique environmental conditions of Leh, especially wide temperature amplitude, photosynthetically active radiation (PAR), and UV-B content. In mungbean microgreens, total phenolics content (TPC) was found positively correlated with FRAP and DPPH, while in lentil microgreens, total flavonoid content (TFC) was found positively correlated with DPPH. The most abundant elements recorded were in the order of K, P, and Ca in mungbean microgreens; and K, Ca, and P in the lentil microgreens. In addition, these Fabaceae microgreens may help in the nutritional security of the population residing in the high-altitude regions of Ladakh, especially during winter months when this region remains landlocked due to heavy snowfall.