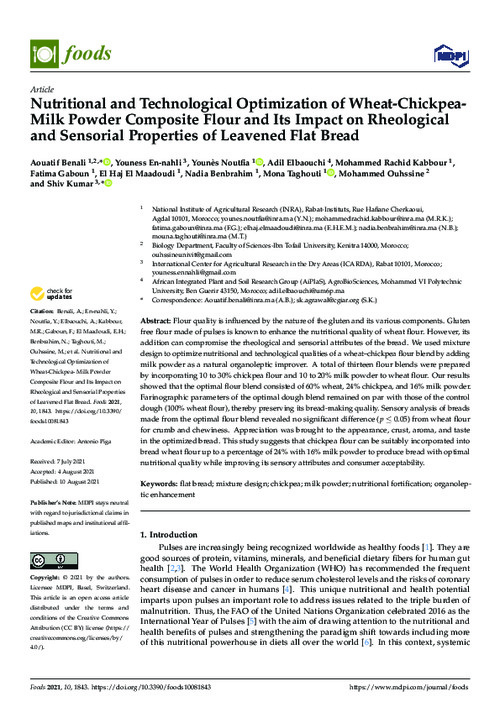 Flour quality is influenced by the nature of the gluten and its various components. Gluten free flour made of pulses is known to enhance the nutritional quality of wheat flour. However, its addition can compromise the rheological and sensorial attributes of the bread. We used mixture design to optimize nutritional and technological qualities of a wheat–chickpea flour blend by adding milk powder as a natural organoleptic improver. A total of thirteen flour blends were prepared by incorporating 10 to 30% chickpea flour and 10 to 20% milk powder to wheat flour. Our results showed that the optimal flour blend consisted of 60% wheat, 24% chickpea, and 16% milk powder. Farinographic parameters of the optimal dough blend remained on par with those of the control dough (100% wheat flour), thereby preserving its bread-making quality. Sensory analysis of breads made from the optimal flour blend revealed no significant difference (p 0.05) from wheat flour for crumb and chewiness. Appreciation was brought to the appearance, crust, aroma, and taste in the optimized bread. This study suggests that chickpea flour can be suitably incorporated into bread wheat flour up to a percentage of 24% with 16% milk powder to produce bread with optimal nutritional quality while improving its sensory attributes and consumer acceptability.