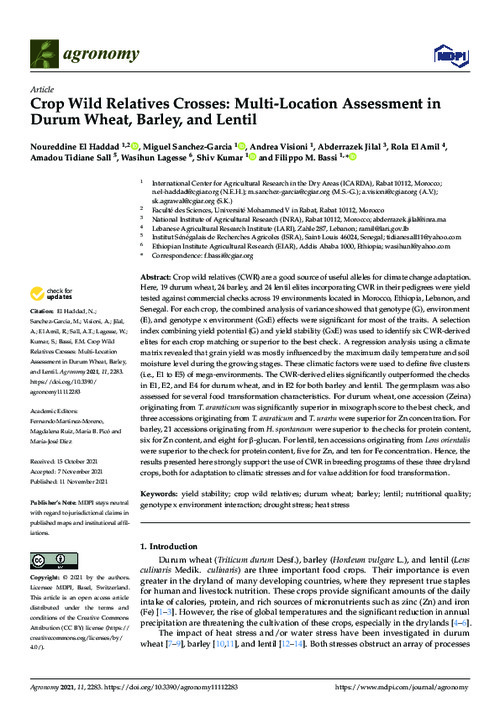 Crop wild relatives (CWR) are a good source of useful alleles for climate change adaptation. Here, 19 durum wheat, 24 barley, and 24 lentil elites incorporating CWR in their pedigrees were yield tested against commercial checks across 19 environments located in Morocco, Ethiopia, Lebanon, and Senegal. For each crop, the combined analysis of variance showed that genotype (G), environment (E), and genotype x environment (GxE) effects were significant for most of the traits. A selection index combining yield potential (G) and yield stability (GxE) was used to identify six CWR-derived elites for each crop matching or superior to the best check. A regression analysis using a climate matrix revealed that grain yield was mostly influenced by the maximum daily temperature and soil moisture level during the growing stages. These climatic factors were used to define five clusters (i.e., E1 to E5) of mega-environments. The CWR-derived elites significantly outperformed the checks in E1, E2, and E4 for durum wheat, and in E2 for both barley and lentil. The germplasm was also assessed for several food transformation characteristics. For durum wheat, one accession (Zeina) originating from T. araraticum was significantly superior in mixograph score to the best check, and three accessions originating from T. araraticum and T. urartu were superior for Zn concentration. For barley, 21 accessions originating from H. spontaneum were superior to the checks for protein content, six for Zn content, and eight for -glucan. For lentil, ten accessions originating from Lens orientalis were superior to the check for protein content, five for Zn, and ten for Fe concentration. Hence, the results presented here strongly support the use of CWR in breeding programs of these three dryland crops, both for adaptation to climatic stresses and for value addition for food transformation.