Does tillage should be an evaluation factor in the breeding program for major cereal and legume crops ? 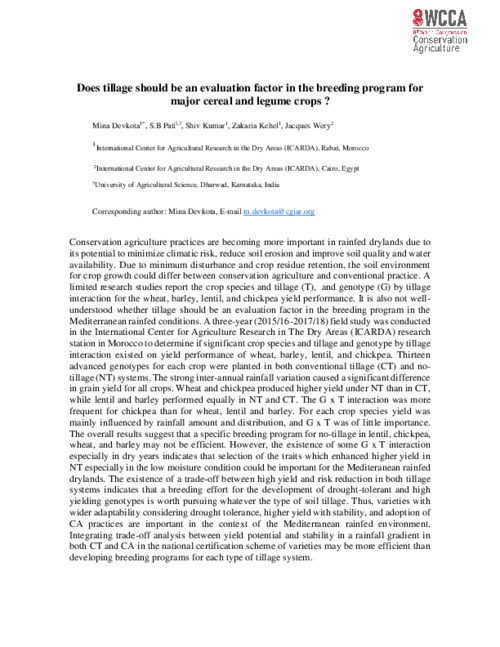 Mina Devkota Wasti, S. B Pati, Zakaria Kehel, Jacques Wery. (1/3/2021). Does tillage should be an evaluation factor in the breeding program for major cereal and legume crops.

Conservation agriculture practices are becoming more important in rainfed drylands due to its potential to minimize climatic risk, reduce soil erosion and improve soil quality and water availability. Due to minimum disturbance and crop residue retention, the soil environment for crop growth could differ between conservation agriculture and conventional practice. A limited research studies report the crop species and tillage (T), and genotype (G) by tillage interaction for the wheat, barley, lentil, and chickpea yield performance. It is also not well-understood whether tillage should be an evaluation factor in the breeding program in the Mediterranean rainfed conditions. A three-year (2015/16-2017/18) field study was conducted in the International Center for Agriculture Research in The Dry Areas (ICARDA) research station in Morocco to determine if significant crop species and tillage and genotype by tillage interaction existed on yield performance of wheat, barley, lentil, and chickpea. Thirteen advanced genotypes for each crop were planted in both conventional tillage (CT) and no-tillage (NT) systems. The strong inter-annual rainfall variation caused a significant difference in grain yield for all crops. Wheat and chickpea produced higher yield under NT than in CT, while lentil and barley performed equally in NT and CT. The G x T interaction was more frequent for chickpea than for wheat, lentil and barley. For each crop species yield was mainly influenced by rainfall amount and distribution, and G x T was of little importance. The overall results suggest that a specific breeding program for no-tillage in lentil, chickpea, wheat, and barley may not be efficient. However, the existence of some G x T interaction especially in dry years indicates that selection of the traits which enhanced higher yield in NT especially in the low moisture condition could be important for the Mediteranean rainfed drylands. The existence of a trade-off between high yield and risk reduction in both tillage systems indicates that a breeding effort for the development of drought-tolerant and high yielding genotypes is worth pursuing whatever the type of soil tillage. Thus, varieties with wider adaptability considering drought tolerance, higher yield with stability, and adoption of CA practices are important in the context of the Mediterranean rainfed environment. Integrating trade-off analysis between yield potential and stability in a rainfall gradient in both CT and CA in the national certification scheme of varieties may be more efficient than developing breeding programs for each type of tillage system.