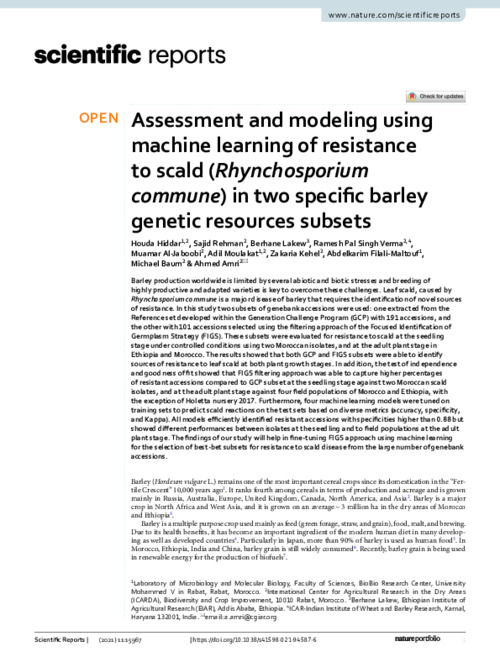 Barley production worldwide is limited by several abiotic and biotic stresses and breeding of highly productive and adapted varieties is key to overcome these challenges. Leaf scald, caused by Rhynchosporium commune is a major disease of barley that requires the identification of novel sources of resistance. In this study two subsets of genebank accessions were used: one extracted from the Reference set developed within the Generation Challenge Program (GCP) with 191 accessions, and the other with 101 accessions selected using the filtering approach of the Focused Identification of Germplasm Strategy (FIGS). These subsets were evaluated for resistance to scald at the seedling stage under controlled conditions using two Moroccan isolates, and at the adult plant stage in Ethiopia and Morocco. The results showed that both GCP and FIGS subsets were able to identify sources of resistance to leaf scald at both plant growth stages. In addition, the test of independence and goodness of fit showed that FIGS filtering approach was able to capture higher percentages of resistant accessions compared to GCP subset at the seedling stage against two Moroccan scald isolates, and at the adult plant stage against four field populations of Morocco and Ethiopia, with the exception of Holetta nursery 2017. Furthermore, four machine learning models were tuned on training sets to predict scald reactions on the test sets based on diverse metrics (accuracy, specificity, and Kappa). All models efficiently identified resistant accessions with specificities higher than 0.88 but showed different performances between isolates at the seedling and to field populations at the adult plant stage. The findings of our study will help in fine-tuning FIGS approach using machine learning for the selection of best-bet subsets for resistance to scald disease from the large number of genebank accessions.