Technical guideline for reproductive biotechnologies of sheep and goat in Ethiopia 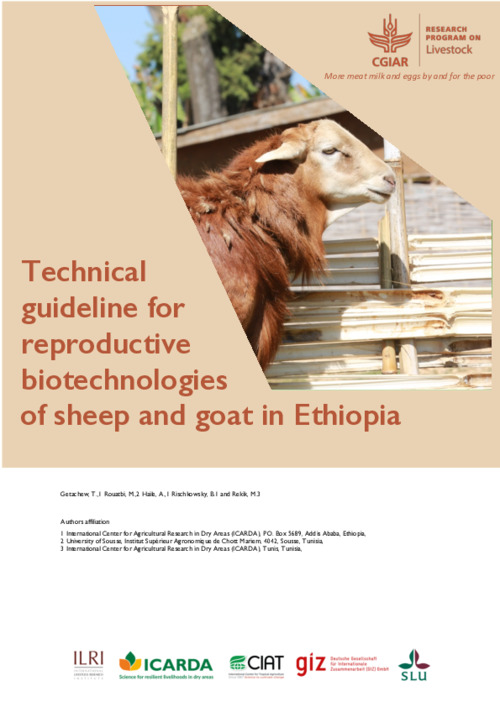 Technical guideline for reproductive biotechnologies of sheep and goat in Ethiopia.

Reproductive biotechnology in animal production is widely used to increase production, reproductive efficiency and rates of genetic improvement (Madan, 2005). According to NRC (2003), animal production biotechnology is defined as ‘the application of scientific and engineering principles to the processing or production of materials by animals or aquatic species to provide goods and services for the well-being of human population’. It could be also defined as ‘that set of techniques by which living creatures are modified for the benefit of humans and other animals (Bin Abdullah et al., 2011). Conventionally, reproductive biotechnology, applied to animal production, includes 4 generations going from artificial insemination (AI) which was the technological advance of the 1950s used in traditional selective breeding and enhancing modern industrial animal production, especially in dairy and poultry (first generation). Other related biotechnologies were adopted to improve the efficiency of AI such us estrus synchronization. After AI and estrus synchronization and with the development of new techniques, embryo transfer (ET) is the most commonly used biotechnology. Later, with the development of DNA techniques, new techniques and technologies including in vitro fertilization (IVF) and sexing embryos appears as third generation of reproductive biotechnologies. Finally a generation of transgenic animals (animals with one or more genes introduced by human intervention), using gene knockout technology to generate animals in which a specific gene has been inactivated or production of nearly identical animals by somatic cell nuclear transfer (also referred to as clones), emerges in the early 1990s (fourth generation) (Cowan and Becker, 2006). Recently, new techniques such as ‘surrogate male’ have emerged, which enables the sterilization of males and to make their bodies produce the sperm of other males. While the livestock could not produce enough sperm to impregnate females, ‘surrogate sires could one day be an alternative to artificial insemination’, says Professor Oatley (Washington State University). Despite all listed techniques, the use of assisted reproductive techniques (ART), such as semen cryopreservation, artificial insemination (AI), estrus synchronization and superovulation, laparoscopic ovum pick-up (LOPU), in vitro maturation, fertilization and culture (IVMFC), intracytoplasmic sperm injection (ICSI), embryo sexing, embryo/oocyte cryopreservation, cloning, stem cell, embryo transfer, pregnancy diagnosis (ultrasonography/hormone essays), remain the best way to improve animal production performance in farm practices (Cowan and Becker, 2006). For example, using AI in the ovine/caprine industry, enhances genetic improvement, synchronizes the lactation period and meat production in order to overcome the market need. Pregnancy diagnosis allows detecting females with reproductive problems and a better control of management conditions such as nutrition improvement. In countries under tropical conditions, such as Ethiopia, sheep and goats production is an important activity for smallholders, particularly as resource by augmenting income and employment and reducing the incidence of rural poverty through direct food production and a vast range of products and services such as cash income, meat, milk, skin, manure, risk spreading/ management and social functions (Adane and Girma, 2008). In Ethiopia, animals are reared in a crop-livestock farming system, under poor management condition, severely limited resources and seasonal fluctuations in feed resources especially under prolonged drought period in the arid and semiarid lowlands of the country, uncontrolled breeding techniques are usually used especially in the absence of improved breeding techniques. Therefore, flock fertility is affected since infertile male and female goats are kept together. In addition, given the diversity of goat breeds, the risk of crossbreeding, and losses of pure-bred genotypes is increased. Animal owners are generally smallholders with little or no land and few animals, who must get through the constraints of the local conditions. In low and middle income countries, such as Ethiopia, biotechnological applications relating to livestock are essential to improve animal production and to conserve the indigenous animal genetic resources. Therefore, they need to be simultaneously suitable for animal owners and dictated by commercial considerations and socio-economic goals (Madan, 2005). The constraints of biotechnology applicated to animal production in such countries are lack of infrastructure, technical skills and the high cost of such techniques.