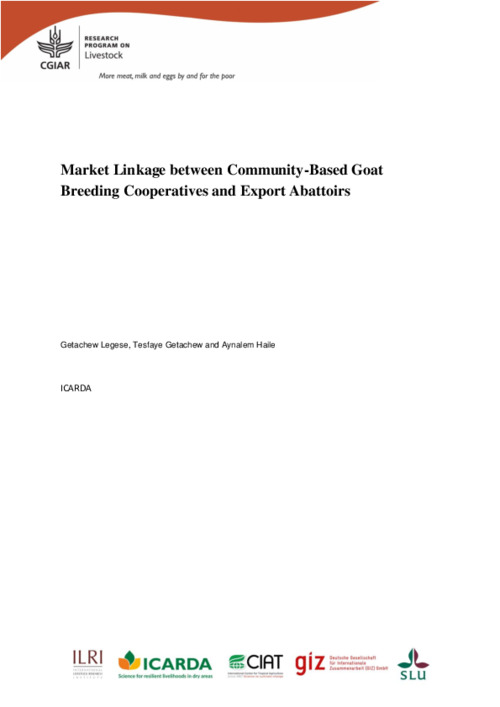 Small ruminant population of Ethiopia, including expert estimates of the pastoral areas, is about 66 million heads of which about 35 million is sheep (Negassa et al., 2011). Small ruminants provide about 46% of the national meat consumption and 58% of the value of hide and skin production (Awgichew et al., 1991). Small ruminants have many advantages over large ruminants for most smallholder farmers, including among others: less feed costs, quicker turnover, easy management and appropriate size at slaughter (Wilson, 1991; Abegaz, 2002; Donkin, 2005). They also suffer far less in mortality during periods of drought than large ruminants (Galal, 1983; Wilson, 1991). In addition, subsistence farmers prefer small ruminants as the risk of large ruminants dying and leaving them with nothing is too great (Sölkner et al., 1998). Goats are the major sources of income for pastoralists and farmers to meet the immediate cash needs of the household. They also provide important source of animal protein (milk and meat) in pastoral areas. With the increased drought cycle and environmental degradation because of the effects of climate change, the pastoral community is expanding goat production as a means of adaptation strategy. Ethiopia is home to genetically diverse goat populations that are widely distributed across ago ecologies (Hassen et al., 2012, Mekuria 2016). Community based small ruminants breeding program that has conducted some successful works on local sheep breeds (Gutu et a., 2015) is expanding to the major goat producing areas of Ethiopia targeting genetic improvement of the various indigenous breeds. This breeding program is a collaborative initiative between ICARDA, ILRI and National Research Institutes. It was started after detailed characterization of the production and marketing system in different agro-ecologies of the country (Gizaw 2010, Hassen et al., 2012). According to Mueller et al (2015). Community based breeding programs are promising tools for livestock genetic improvement under smallholder tropical conditions. Improving the production and marketing of livestock including goats offers rural producers with an opportunity to market high value products to urban consumers (Delgado et al, 1999) and to support the national economy through export of meat. The increase in national and international demand for meat in general and the high demand for goat meat in the Middle east countries is a very good incentive for efforts in genetic improvement to support increased goat production in Ethiopia in order to satisfy both the domestic and international demands. 3 | P a g e Efforts in improving genetic performance through community based breeding programs will be sustainable if and only if genetic improvement and increased production is supported with efficient marketing system. Producers will be encouraged to sustainably increase production if they get good price for their animals and off-take increases over time. This in turn requires identifying marketing bottlenecks and creating strong market linkages. The purpose of this study is thus to identify important challenges for goat marketing in Konso area and create market linkage between goat producers and major consumers.