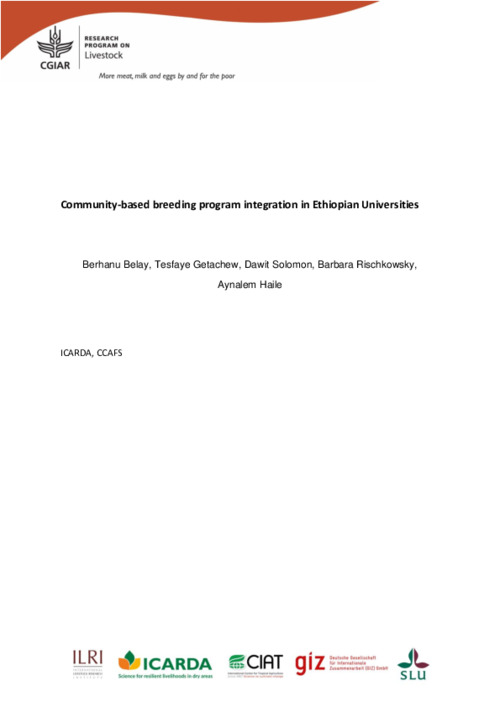 Community-based breeding program is an emerging and alternative genetic improvement approach in smallholder and resource poor farming systems. The program is participatory in nature that captures farmer’s indigenous knowledge. The prime drivers of the program are farmers and the decision is bottom-up and the resource base is internal input such as indigenous breeds that make the initiative sustainable and cost effective. CBBP increased income of participating farmers by 20% as compared to non-participating farmers (Gutu et al., 2015). Genetic gain of 0.21kg/year has been recorded for bonga sheep for six months weight (Haile et al., 2020). Most participating farmers from Menz site have also graduated from a government run safety net program and they now depend on income from sale of sheep for their livelihood. CBBP is a means to conserve the local stock through improvement and utilization. The innovations in CBBP include the empowerment of farmers through cooperative organizations, pooling of small farmers flock to ensure genetic diversity, reverting inbreeding and producing best ram to be shared among breeding groups based on settlement patterns and setting prime price for improved sire through certification that has created new employment opportunities. The program was run by involving multiple of stakeholders such that, ICARDA, ILRI and the national research system in Ethiopia. The paradox is that, the involvement of the Universities in running CBBP was dismal. However, universities are heavily involved in characterization of indigenous stock in their habitat and farming system. The majority of MSc theses have documented characterization of the indigenous stock. A number of articles have been published on indigenous stock characterization. Characterization is not the end by itself; characterization study should be accompanied by a genetic improvement of the local stock for sustainable utilization and conservation. Hence, CBBP could be the right choice to be run by Universities for multiple functions and benefits. Two approaches could be followed at University: integration of the CBBP in course content, course description and teaching resources of animal breeding course, and establishing of CBBP villages in the proximity of the Universities. There are enabling and conducive environments to initiating CBBPs in Universities. There are more than 40 government Universities running Animal science programs. The Universities are fairly distributed in different regions and agro-ecologies possessing unique breeds for genetic improvement. For example, Wollega University has Horro Breed, a prominent breed in the proximity of the University. Injibara University has Dangila/Washera/ sheep found in its door steps. Bonga University can be engaged in improving Bonga sheep, one of the prominent breed in the surrounding of the University. Assosa University has indigenous sheep, Oromo-Arab sheep to run community-based breeding programs. Debre Berhan University has Menz sheep in its proximity, a breed which is a livelihood option for a communities living under rugged and degraded landscape. Semera University is located in the arid areas that have Afar goat in their door steps. Live animal export and abattoirs have high demand for Afar goat that requires genetic improvement to meet the existing and future demands. 5 | P a g e The Universities have a critical mass of students and academic staff that can run CBBPs and benefit from its multiple advantages. Universities have the responsibility of running community services. However, most are alleged of not bringing impact on the lives of the communities they operate in. We believe CBBP can be an entry point in this endeavour to bring about impact as witnessed by existing CBBPs. CBBP has also the ability to synergize the triple mandates of the Universities, including research, community services and teaching.