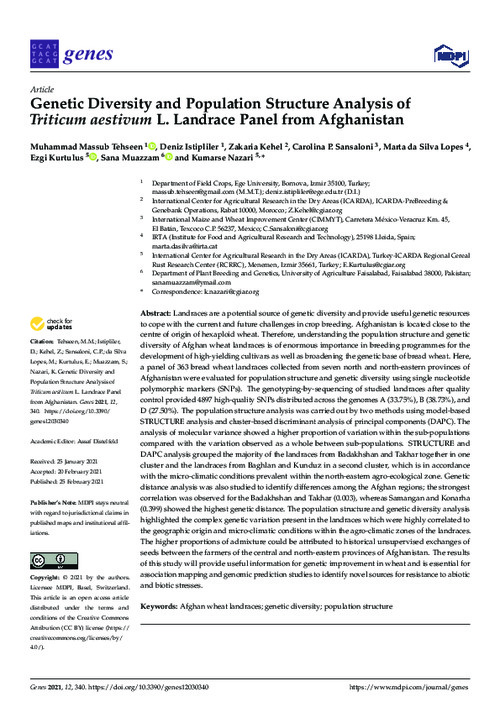 Landraces are a potential source of genetic diversity and provide useful genetic resources to cope with the current and future challenges in crop breeding. Afghanistan is located close to the centre of origin of hexaploid wheat. Therefore, understanding the population structure and genetic diversity of Afghan wheat landraces is of enormous importance in breeding programmes for the development of high-yielding cultivars as well as broadening the genetic base of bread wheat. Here, a panel of 363 bread wheat landraces collected from seven north and north-eastern provinces of Afghanistan were evaluated for population structure and genetic diversity using single nucleotide polymorphic markers (SNPs). The genotyping-by-sequencing of studied landraces after quality control provided 4897 high-quality SNPs distributed across the genomes A (33.75%), B (38.73%), and D (27.50%). The population structure analysis was carried out by two methods using model-based STRUCTURE analysis and cluster-based discriminant analysis of principal components (DAPC). The analysis of molecular variance showed a higher proportion of variation within the sub-populations compared with the variation observed as a whole between sub-populations. STRUCTURE and DAPC analysis grouped the majority of the landraces from Badakhshan and Takhar together in one cluster and the landraces from Baghlan and Kunduz in a second cluster, which is in accordance with the micro-climatic conditions prevalent within the north-eastern agro-ecological zone. Genetic distance analysis was also studied to identify differences among the Afghan regions; the strongest correlation was observed for the Badakhshan and Takhar (0.003), whereas Samangan and Konarha (0.399) showed the highest genetic distance. The population structure and genetic diversity analysis highlighted the complex genetic variation present in the landraces which were highly correlated to the geographic origin and micro-climatic conditions within the agro-climatic zones of the landraces. The higher proportions of admixture could be attributed to historical unsupervised exchanges of seeds between the farmers of the central and north-eastern provinces of Afghanistan. The results of this study will provide useful information for genetic improvement in wheat and is essential for association mapping and genomic prediction studies to identify novel sources for resistance to abiotic and biotic stresses.