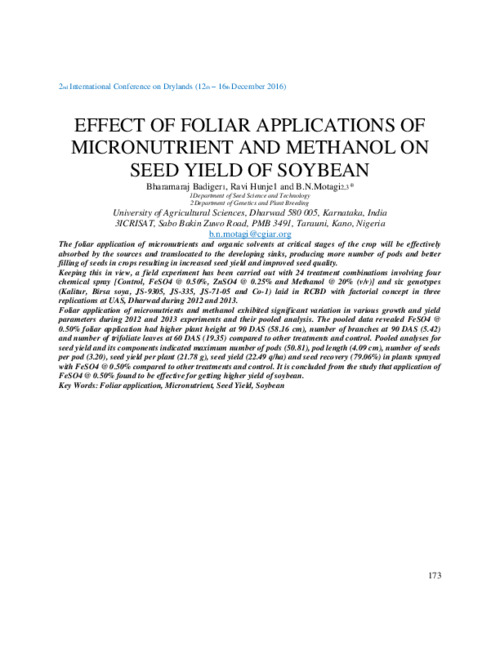 The foliar application of micronutrients and organic solvents at critical stages of the crop will be effectively absorbed by the sources and translocated to the developing sinks, producing more number of pods and better filling of seeds in crops resulting in increased seed yield and improved seed quality. Keeping this in view, a field experiment has been carried out with 24 treatment combinations involving four chemical spray [Control, FeSO4 @ 0.50%, ZnSO4 @ 0.25% and Methanol @ 20% (v/v)] and six genotypes (Kalitur, Birsa soya, JS-9305, JS-335, JS-71-05 and Co-1) laid in RCBD with factorial concept in three replications at UAS, Dharwad during 2012 and 2013. Foliar application of micronutrients and methanol exhibited significant variation in various growth and yield parameters during 2012 and 2013 experiments and their pooled analysis. The pooled data revealed FeSO4 @ 0.50% foliar application had higher plant height at 90 DAS (58.16 cm), number of branches at 90 DAS (5.42) and number of trifoliate leaves at 60 DAS (19.35) compared to other treatments and control. Pooled analyses for seed yield and its components indicated maximum number of pods (50.81), pod length (4.09 cm), number of seeds per pod (3.20), seed yield per plant (21.78 g), seed yield (22.49 q/ha) and seed recovery (79.06%) in plants sprayed with FeSO4 @ 0.50% compared to other treatments and control. It is concluded from the study that application of FeSO4 @ 0.50% found to be effective for getting higher yield of soybean. Key Words: Foliar application, Micronutrient, Seed Yield, Soybean.