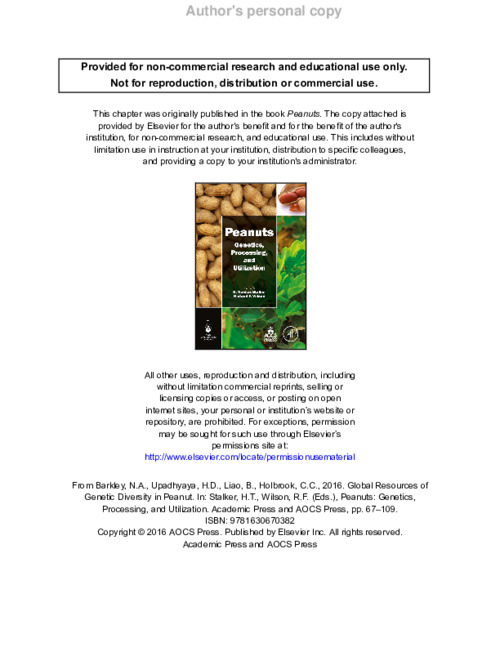 Peanut or groundnut (Arachis hypogaea L.) is an annual herb, with geocarpic fruits, and an indeterminate growth habit. It is classified as a legume in the plant family Fabaceae. Carl Linneaus first described the cultivated species in 1753, as A. hypogaea which was derived from the word “arachos” meaning a weed and “hypogaea” which means an underground chamber (Stalker and Simpson, 1995). Cultivated peanut can be classified into two subspecies, fastigiata and hypogaea, based on the presence or absence of floral axes on the main stem. They can be further divided into six botanical varieties (subspecies hypogaea: var. hirsuta, and var. hypogaea; subspecies fastigiata: var. aequatoriana, var. fastigiata, var. peruviana, and var. vulgaris) based on a range of morphological characteristics such as growth habit, trichomes, and pod morphology. Many intermediates exist among these botanical types, therefore, the taxonomy is not always clear (Stalker and Simpson, 1995). In 1969, Krapovickas postulated that the variety hypogaea was the most ancient due to its runner type habit, no floral spikes, and branching patterns which is similar to the characteristics of the wild Arachis species (Krapovickas, 1969)...