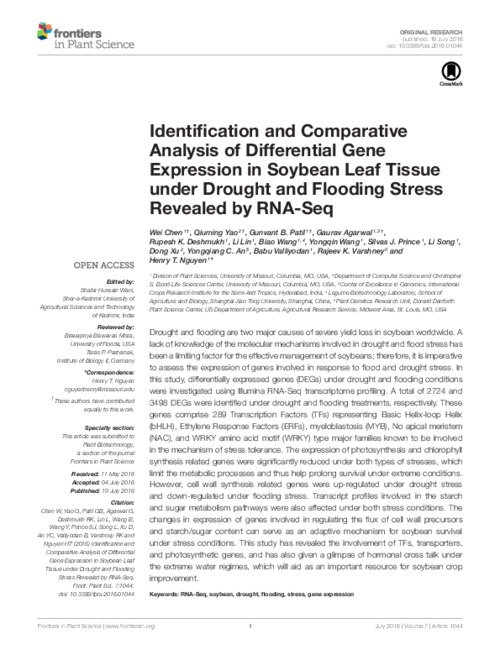 Drought and flooding are two major causes of severe yield loss in soybean worldwide. A lack of knowledge of the molecular mechanisms involved in drought and flood stress has been a limiting factor for the effective management of soybeans; therefore, it is imperative to assess the expression of genes involved in response to flood and drought stress. In this study, differentially expressed genes (DEGs) under drought and flooding conditions were investigated using Illumina RNA-Seq transcriptome profiling. A total of 2724 and 3498 DEGs were identified under drought and flooding treatments, respectively. These genes comprise 289 Transcription Factors (TFs) representing Basic Helix-loop Helix (bHLH), Ethylene Response Factors (ERFs), myeloblastosis (MYB), No apical meristem (NAC), and WRKY amino acid motif (WRKY) type major families known to be involved in the mechanism of stress tolerance. The expression of photosynthesis and chlorophyll synthesis related genes were significantly reduced under both types of stresses, which limit the metabolic processes and thus help prolong survival under extreme conditions. However, cell wall synthesis related genes were up-regulated under drought stress and down-regulated under flooding stress. Transcript profiles involved in the starch and sugar metabolism pathways were also affected under both stress conditions. The changes in expression of genes involved in regulating the flux of cell wall precursors and starch/sugar content can serve as an adaptive mechanism for soybean survival under stress conditions. This study has revealed the involvement of TFs, transporters, and photosynthetic genes, and has also given a glimpse of hormonal cross talk under the extreme water regimes, which will aid as an important resource for soybean crop improvement.