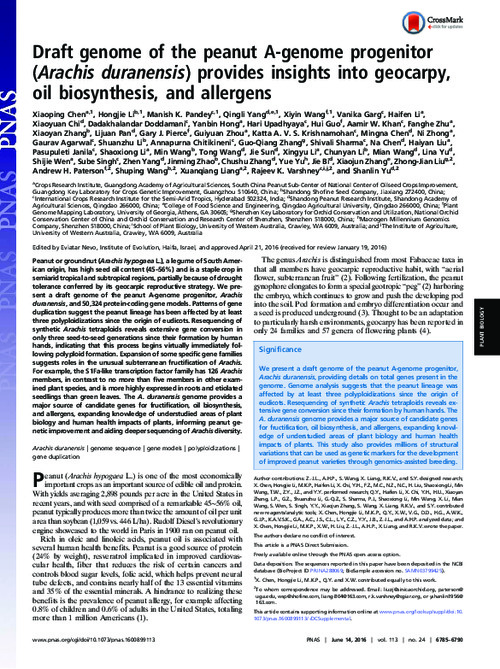 Peanut or groundnut (Arachis hypogaea L.), a legume of South American origin, has high seed oil content (45–56%) and is a staple crop in semiarid tropical and subtropical regions, partially because of drought tolerance conferred by its geocarpic reproductive strategy. We present a draft genome of the peanut A-genome progenitor, Arachis duranensis, and 50,324 protein-coding gene models. Patterns of gene duplication suggest the peanut lineage has been affected by at least three polyploidizations since the origin of eudicots. Resequencing of synthetic Arachis tetraploids reveals extensive gene conversion in only three seed-to-seed generations since their formation by human hands, indicating that this process begins virtually immediately following polyploid formation. Expansion of some specific gene families suggests roles in the unusual subterranean fructification of Arachis. For example, the S1Fa-like transcription factor family has 126 Arachis members, in contrast to no more than five members in other examined plant species, and is more highly expressed in roots and etiolated seedlings than green leaves. The A. duranensis genome provides a major source of candidate genes for fructification, oil biosynthesis, and allergens, expanding knowledge of understudied areas of plant biology and human health impacts of plants, informing peanut genetic improvement and aiding deeper sequencing of Arachis diversity.