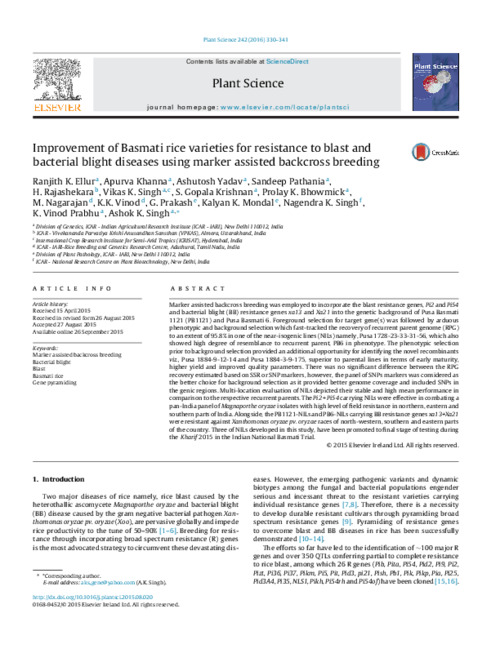 Marker assisted backcross breeding was employed to incorporate the blast resistance genes, Pi2 and Pi54 and bacterial blight (BB) resistance genes xa13 and Xa21 into the genetic background of Pusa Basmati 1121 (PB1121) and Pusa Basmati 6. Foreground selection for target gene(s) was followed by arduous phenotypic and background selection which fast-tracked the recovery of recurrent parent genome (RPG) to an extent of 95.8% in one of the near-isogenic lines (NILs) namely, Pusa 1728-23-33-31-56, which also showed high degree of resemblance to recurrent parent, PB6 in phenotype. The phenotypic selection prior to background selection provided an additional opportunity for identifying the novel recombinants viz., Pusa 1884-9-12-14 and Pusa 1884-3-9-175, superior to parental lines in terms of early maturity, higher yield and improved quality parameters. There was no significant difference between the RPG recovery estimated based on SSR or SNP markers, however, the panel of SNPs markers was considered as the better choice for background selection as it provided better genome coverage and included SNPs in the genic regions. Multi-location evaluation of NILs depicted their stable and high mean performance in comparison to the respective recurrent parents. The Pi2 + Pi54 carrying NILs were effective in combating a pan-India panel of Magnaporthe oryzae isolates with high level of field resistance in northern, eastern and southern parts of India. Alongside, the PB1121-NILs and PB6-NILs carrying BB resistance genes xa13+Xa21 were resistant against Xanthomonas oryzae pv. oryzae races of north-western, southern and eastern parts of the country. Three of NILs developed in this study, have been promoted to final stage of testing during the ​Kharif 2015 in the Indian National Basmati Trial.