Methodology for Assessing and Monitoring Rangeland Vegetation in Central Asia 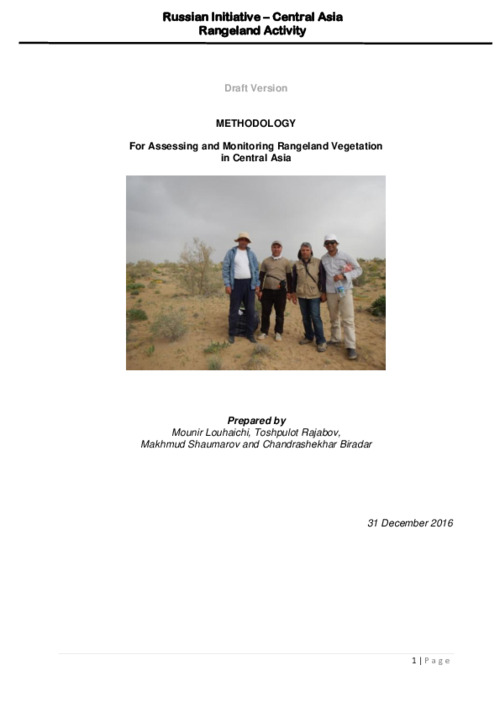 Methodology for Assessing and Monitoring Rangeland Vegetation in Central Asia.

Rangelands Central Asian countries occupy a total area of approximately 260×106 hm2 , occupying 65% of the total land area of these five countries (Gintzburger, 2004). These rangelands are considered as the largest contiguous area of grazed land in the world (Mirzabaev et al., 2016). Central Asia rangelands are characterized by spatiotemporal heterogeneity that is associated with climate, floristic biodiversity, topographic variability as well as anthropogenic disturbances. They are the main forage source for livestock that supports the livelihood of resources-poor pastoral and agro-pastoral communities (Larbi et al., 2008). Rangeland cover mapping has become a widely used and an important resource for characterizing rangeland structure and function. With recent technological advances in image access and image analysis software, it might be possible to develop new methods for measuring vegetation that are more precise and more cost-effective than the techniques currently in use (Chandrashekhar et al., 2015; Louhaichi et al., 2013). Near earth as well as satellite remote sensing can be an effective tool for characterizing and monitoring rangeland condition and trend. Our objective is to develop a toolkit for monitoring and assessing rangeland vegetation that could be rapidly implemented while retaining accuracy. We wanted to retain the following qualities in our technique: speed and efficiency, a quantifiable level of accuracy, verifiable results, statistical robustness, and easily interpreted results. The methodology should be flexible enough to be deplyed in similar rangeland ecosystems in the dry areas.