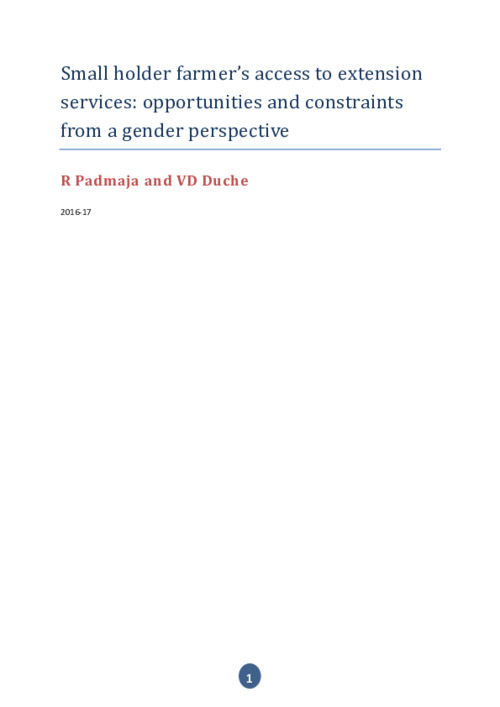 Agricultural extension has the potential of bridging research laboratories and the in-field practices of individual farmers. Extension starts with knowledge management and ends up with human capital enrichment. Agricultural extension by its nature has an important role in promoting the adoption of new technologies and innovations). In India, agricultural extension has wide mandates and despite the pluralistic extension approaches, its coverage and use of services is limited. This is even more so in the Semi-Arid regions that are characterized by harsh environments, policy bias and represented by marginal and smallholder farmers. In addition, gender inequality exists in the dissemination of extension services which needs special attention to improve the decision making process as well as the livelihoods of men and women. Access to extension services by women is weaker than it is for men, as proportionally fewer women attend community meetings organized by extension agents and substantially fewer women visit demonstration homes and plots. Puskur (2013) finds strong evidence for a cultural perception that “women don’t farm,” a perception that persists even though women engage in a wide range of agricultural activities. This study assesses smallholder men, women access to extension services and thereby identify gender responsive extension options. This study provides an empirical evidence and analysis on the difference in access to extension services from a gender perspective using data collected from 240 households from six villages of Karnataka and Rajasthan states in India. Women had lower access to extension services as compared to men. Biggest information source was the progressive farmer/Relative/neighbour (18.45 percent), followed by NGO, input dealer and television.