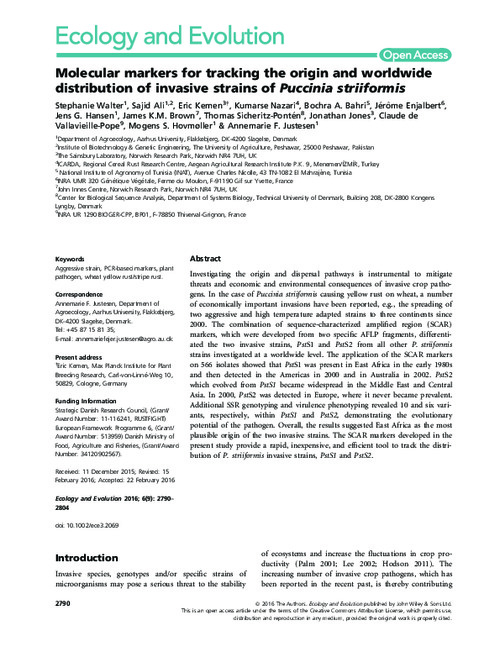 Investigating the origin and dispersal pathways is instrumental to mitigate threats and economic and environmental consequences of invasive crop pathogens. In the case of Puccinia striiformis causing yellow rust on wheat, a number of economically important invasions have been reported, e.g., the spreading of two aggressive and high temperature adapted strains to three continents since 2000. The combination of sequence-characterized amplified region (SCAR) markers, which were developed from two specific AFLP fragments, differentiated the two invasive strains, PstS1 and PstS2 from all other P. striiformis strains investigated at a worldwide level. The application of the SCAR markers on 566 isolates showed that PstS1 was present in East Africa in the early 1980s and then detected in the Americas in 2000 and in Australia in 2002. PstS2 which evolved from PstS1 became widespread in the Middle East and Central Asia. In 2000, PstS2 was detected in Europe, where it never became prevalent. Additional SSR genotyping and virulence phenotyping revealed 10 and six variants, respectively, within PstS1 and PstS2, demonstrating the evolutionary potential of the pathogen. Overall, the results suggested East Africa as the most plausible origin of the two invasive strains. The SCAR markers developed in the present study provide a rapid, inexpensive, and efficient tool to track the distribution of P. striiformis invasive strains, PstS1 and PstS2.