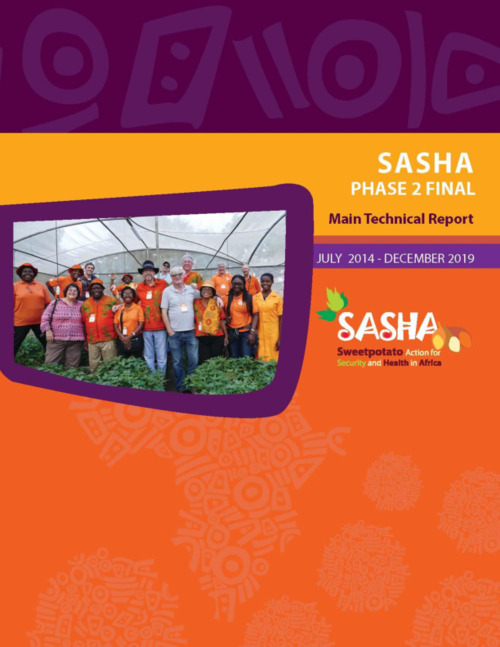 The 5-year (July 2014–October 2019) Sweetpotato Action for Security and Health in Africa Phase 2 project (SASHA2) has succeeded in almost all its objectives centered on resolving the major bottlenecks for fully exploiting sweetpotato’s potential to serve the needs of resource-poor farmers in sub-Saharan Africa (SSA). By continuing to build a vibrant community of practice (CoP), SASHA2 has accomplished the following: 37 new nutritious varieties bred in Africa with superior traits have been released since 2014, use of the heterosis exploiting breeding scheme (HEBS) validated, use of accelerated breeding scheme (ABS) widely adopted, the efficiency of the pre-basic seed system enhanced in 10 countries, new techniques to improve seed systems evaluated, the orange-fleshed sweetpotato (OFSP) purée has been improved and is an economically viable product, and a regional laboratory of excellence in nutrition composition analysis has been established and fully operational. These advances have underpinned the ability of partners under the Sweetpotato for Profit and Health Initiative (SPHI) to reach 6.2m households (HH) with improved varieties of sweetpotato since 2009. Of the 32 key milestones set, 22 (68.8%) have been achieved, 3 (9.4%) have been achieved with modification, 4 (12.5%) almost achieved, and 3 (9.4%) did not meet the desired level of success and will require new approaches. The major problematic Page 2 of 88 SASHA Phase 2 Main Technical Report: FINAL July 2014-October 2019 areas not reached are the transgenic work on sweetpotato weevil and economically viable, solar-powered cold storage. However, considerable progress was made on the latter. Appendix A provides the detailed Results Tracker and Appendix B the expenditures report. A reference list of all articles, manuals, and brochures published to date is provided at the end of the technical report