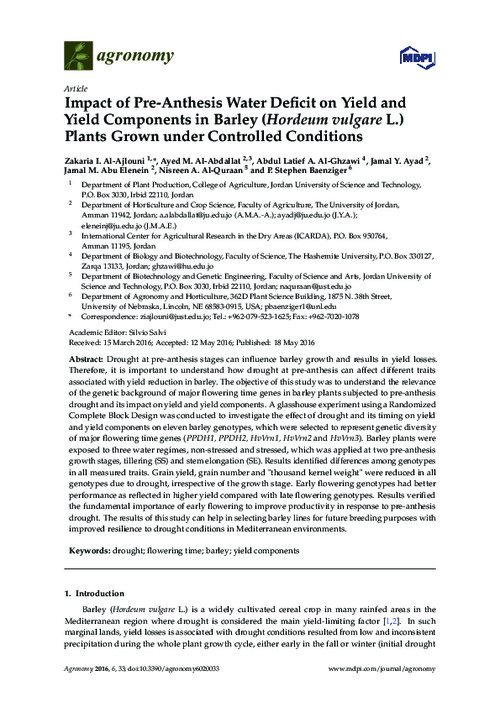 Drought at pre-anthesis stages can influence barley growth and results in yield losses. Therefore, it is important to understand how drought at pre-anthesis can affect different traits associated with yield reduction in barley. The objective of this study was to understand the relevance of the genetic background of major flowering time genes in barley plants subjected to pre-anthesis drought and its impact on yield and yield components. A glasshouse experiment using a Randomized Complete Block Design was conducted to investigate the effect of drought and its timing on yield and yield components on eleven barley genotypes, which were selected to represent genetic diversity of major flowering time genes (PPDH1, PPDH2, HvVrn1, HvVrn2 and HvVrn3). Barley plants were exposed to three water regimes, non-stressed and stressed, which was applied at two pre-anthesis growth stages, tillering (SS) and stem elongation (SE). Results identified differences among genotypes in all measured traits. Grain yield, grain number and thousand kernel weight were reduced in all genotypes due to drought, irrespective of the growth stage. Early flowering genotypes had better performance as reflected in higher yield compared with late flowering genotypes. Results verified the fundamental importance of early flowering to improve productivity in response to pre-anthesis drought. The results of this study can help in selecting barley lines for future breeding purposes with improved resilience to drought conditions in Mediterranean environments.