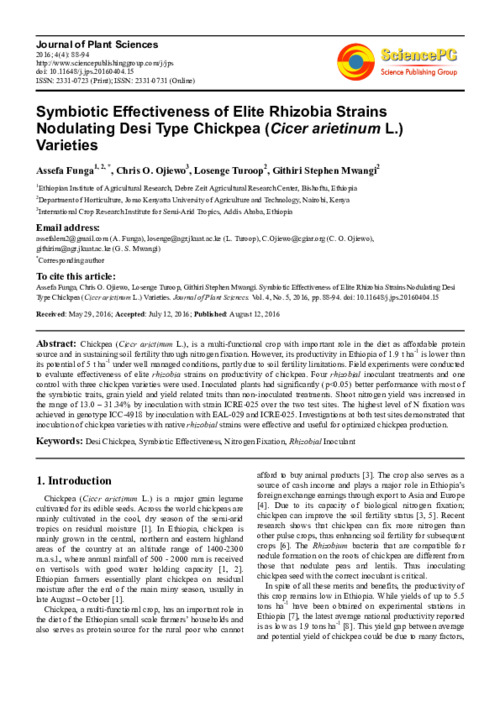 Chickpea (Cicer arietinum L.), is a multi-functional crop with important role in the diet as affordable protein source and in sustaining soil fertility through nitrogen fixation. However, its productivity in Ethiopia of 1.9 t ha-1 is lower than its potential of 5 t ha-1 under well managed conditions, partly due to soil fertility limitations. Field experiments were conducted to evaluate effectiveness of elite rhizobia strains on productivity of chickpea. Four rhizobial inoculant treatments and one control with three chickpea varieties were used. Inoculated plants had significantly (p<0.05) better performance with most of the symbiotic traits, grain yield and yield related traits than non-inoculated treatments. Shoot nitrogen yield was increased in the range of 13.0 – 31.34% by inoculation with strain ICRE-025 over the two test sites. The highest level of N fixation was achieved in genotype ICC-4918 by inoculation with EAL-029 and ICRE-025. Investigations at both test sites demonstrated that inoculation of chickpea varieties with native rhizobial strains were effective and useful for optimized chickpea production