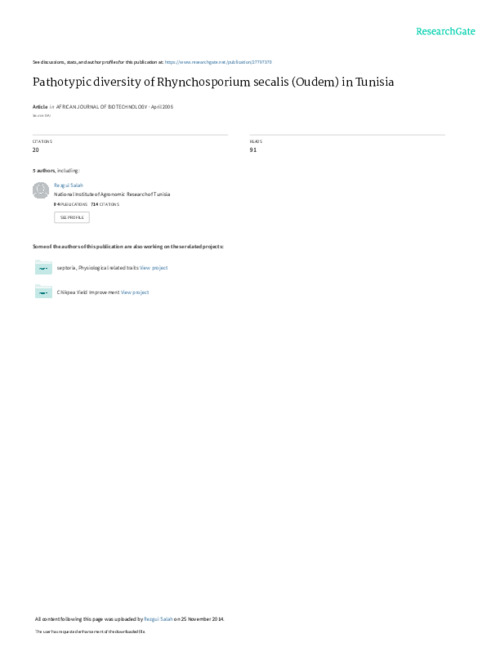 Scald, caused by Rhynchosporium secalis (Oudem), is an important disease of barley in Tunisia particularly in northern, northwestern and central parts of the country where the climate is usually cold and wet during most of the barley growing season. Pathogenic variability of the barley scald pathogen in Tunisia was determined by testing the pathogenicity of 100 isolates from 5 different regions on 19 host differentials. Pathotypic diversity was high, with 93 R. secalis pathotypes identified on two differential sets (one comprising 9 and the other 10 barley lines) containing known resistance genes. A few pathotypes comprised 2% of the isolates; however, the majorities were represented by a single isolate. None of the differential lines was resistant to all isolates. The differential cultivar Astrix was the least compatible with the scald pathotypes followed by the differential cultivars Atlas and Abyssinia. Compatibility of the pathotypes on Rihane (69%) was close to that on Osiris (73%) and La Mesita (61%). None of the pathotypes was found in all the five regions of Tunisia surveyed. Some pathotypes were specific to a single region while others were found in several regions. The incidence of pathotypes varied considerably among regions, with region 3 (northwestern Tunisia) comprising the largest number of pathotypes. Virulent pathotypes were recovered in all regions but more pathotypic variability (44%) was observed in the semi-arid region 3. Differential cultivars allowed classification of R. secalis in four virulence groups. Canonical discriminant analysis showed no apparent association between virulence and geographical origin of the populations. Pathogenic variability in R. secalis in Tunisia was found not to be associated with geographical region, hence, the necessity for deployment of different resistance sources in major barley growing areas.