Plant growth‑promotion and biofortification of chickpea and pigeonpea through inoculation of biocontrol potential bacteria, isolated from organic soils 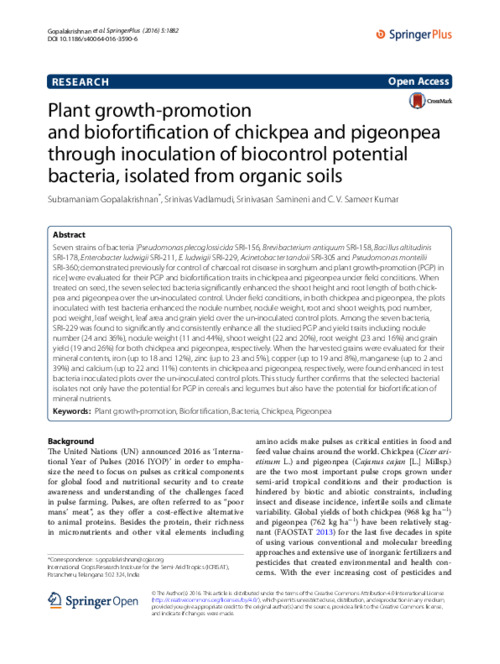 Seven strains of bacteria [Pseudomonas plecoglossicida SRI-156, Brevibacterium antiquum SRI-158, Bacillus altitudinis SRI-178, Enterobacter ludwigii SRI-211, E. ludwigii SRI-229, Acinetobacter tandoii SRI-305 and Pseudomonas monteilii SRI-360; demonstrated previously for control of charcoal rot disease in sorghum and plant growth-promotion (PGP) in rice] were evaluated for their PGP and biofortification traits in chickpea and pigeonpea under field conditions. When treated on seed, the seven selected bacteria significantly enhanced the shoot height and root length of both chickpea and pigeonpea over the un-inoculated control. Under field conditions, in both chickpea and pigeonpea, the plots inoculated with test bacteria enhanced the nodule number, nodule weight, root and shoot weights, pod number, pod weight, leaf weight, leaf area and grain yield over the un-inoculated control plots. Among the seven bacteria, SRI-229 was found to significantly and consistently enhance all the studied PGP and yield traits including nodule number (24 and 36%), nodule weight (11 and 44%), shoot weight (22 and 20%), root weight (23 and 16%) and grain yield (19 and 26%) for both chickpea and pigeonpea, respectively. When the harvested grains were evaluated for their mineral contents, iron (up to 18 and 12%), zinc (up to 23 and 5%), copper (up to 19 and 8%), manganese (up to 2 and 39%) and calcium (up to 22 and 11%) contents in chickpea and pigeonpea, respectively, were found enhanced in test bacteria inoculated plots over the un-inoculated control plots. This study further confirms that the selected bacterial isolates not only have the potential for PGP in cereals and legumes but also have the potential for biofortification of mineral nutrients